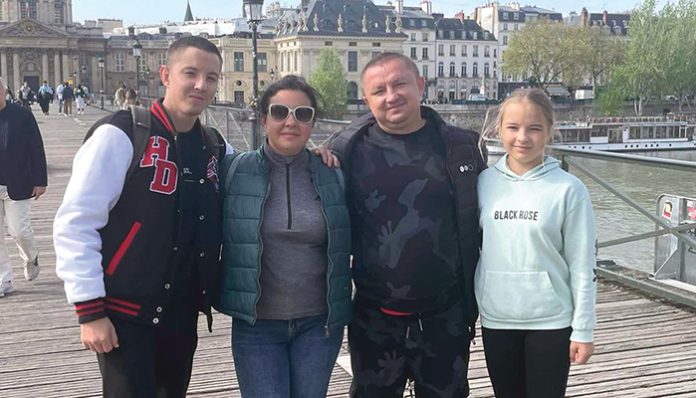 Outaouias – A Ukrainian family, who was originally hosted by the Cameron family in the Pontiac, has now moved to Gatineau. Yuliia and Serhii Dobrovolskiiy, along with their son Serhii Jr. and daughter Kseniia call the Ukrainian city of Kharkiv home. They are slowly becoming more settled despite the challenges they continue to experience as they start their new life in Canada.

On February 24, the young family was travelling in Sri Lanka when Russia attacked their home and destroyed the life they’d been building. They reached out to the High Commission of Canada in Sri Lanka and, several weeks later, flew to Canada after having been invited by Pontiac residents Amy and Jeremy Cameron.

The Cameron’s had signed up to host Ukrainians seeking refuge on the website IcanHELP.host. After several conversations, the Camerons decided to welcome the Dobrovolskiiys into their home and provided the suddenly homeless family with food, clothes, etc.

Serhii Jr. is the only English speaker in the family of four. He told the Journal that the family enjoyed their time in the Pontiac and that their hosts were very kind to them. “We are still in touch with our friends in Pontiac. We decided to come to Gatineau because we were not able to find jobs in the Pontiac.

Most of the jobs in that region are related to farming and we just don’t have any experience in that sector.”

The family is now renting an apartment in Gatineau. Serhii Jr. and his mom are supporting the family by working in the service industry cooking and cleaning. They are trying to learn both official languages in hopes of finding higher paying jobs. “In Ukraine we had a business. We can do that here too and import products to Canada and be more useful to Canadians,” he said.

For now, the family is receiving some financial assistance from the government to help cover the basics, but they still work long hours to cover the rest of their expenses. Serhii says the main challenges they face are social differences and the language. “We need to learn more about the social situation here and adapt to it. Canada is different from Ukraine; for example, the processes are slower here. People are nice to us; we asked for furniture and in just a few days we received everything we needed. The government is also helpful. They’ve offered us free language courses, and my parents are trying to learn the languages. Our goal is to get good qualifications for jobs here.”

The Dobrovolskiiy family was granted a 3-year temporary visa but hopes to start a new life here. Serhii’s younger sister went to Dr. S. E. McDowell Elementary in Shawville during their stay in the Pontiac but had difficulty adapting. Quebec rules are such that she has no choice but to go to a French school. The government of Quebec has given her one year to learn French, starting in September, so she can then continue going to school in Gatineau.

Serhii explained that although they moved to Gatineau, they are still in touch with their friends in the Pontiac. They visit the Camerons and seek out their help and advice when they need it.

“There was no Ukrainian community in the Pontiac but there are in Gatineau and Ottawa. Some of them are nice to us and some are not. Some Ukrainians believe that we were lucky because we were able to come to Canada easily! It took them a long time to immigrate to Canada before Russia launched the biggest escalation in a war that has been going on since the 2014 invasion and annexation of Crimea. We don’t necessarily think that we are lucky; we had a good life back home and now we are just trying to stay safe and alive.

We’re now a bit more settled and are smart enough to survive and start our new life here. For now, we are OK. We just need to adapt to the social differences and the languages. We have insurance, food, a place to live; that’s good for now,” he said.