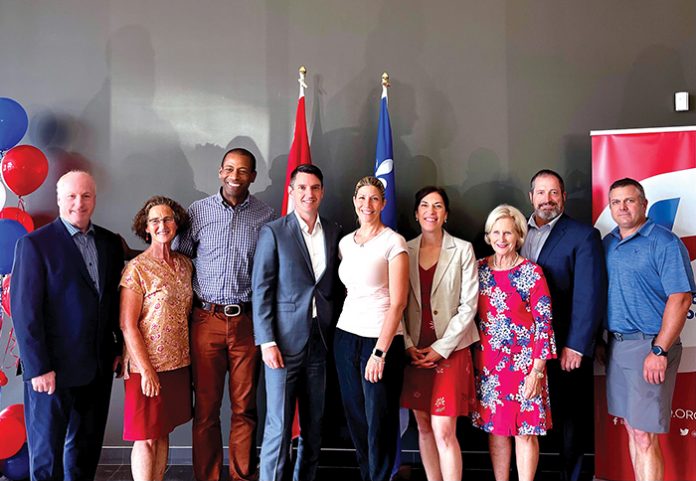 Local politicians and other party members at the nomination meeting for Liberal André Fortin to represent the Pontiac in the upcoming provincial election.

QUYON – Members of the Quebec Liberal Party assembled for the nomination meeting of André Fortin, to represent Pontiac as the official candidate for the 2022 general election to be held this fall. Many elected officials and members of the local association attended the meeting to offer their support.

Fortin was the Official Opposition House Leader for the past four years and has represented the Pontiac as their MNA since 2014. During his most recent mandate, the former Minister of Transport (2017 to 2018) worked on files and sat on committees including public finance, regional vitality, social services and public health as the Official Opposition critic. He was featured in LaPresse newspaper’s parliamentary ranking and obtained fourth and fifth place as parliamentarian of the year in 2020 and 2021, in addition to being a finalist in the categories of Best Speaker and Best Riding Representative.

Born in Quyon, the Liberal MNA resides in Aylmer with his wife Marlene and their two daughters. He is the current Liberal critic for Transport and commits to continue responding to Pontiac’s priorities such as access to health care, the rising cost of living, economic development in rural areas and defending all citizens’ rights.

During the last parliamentary session, Fortin initiated two bills, both of which were passed unanimously : “An Act to establish a presumption of consent to organ or tissue donation after death” and “An Act to improve the quality of care through the setting of ratios on certain institutions governed by the Act respecting health services and social services”.

Fortin told the Journal: “I am pleased to offer my services once again to the people of Pontiac and Aylmer, the community in which I was born and where I am raising my own children today.

There is still a lot of work to be done to ensure that the people of the region have access to quality health care services, to ensure a stable economy in the Pontiac and to help the people of the region cope with the drastic increase in the cost of living. I would like to thank the 200 residents of the region who came out to show me their support, especially the many mayors who have indicated that they believe in our common vision and want to continue our collaboration.”