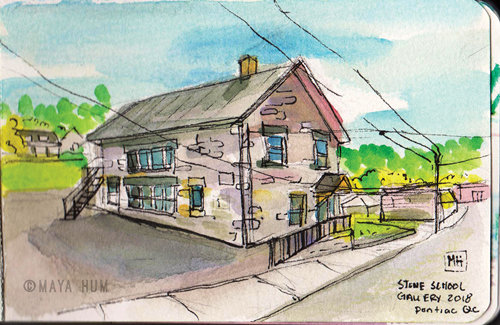 The Pontiac Artists’ Association held their annual general meeting via ZOOM on December 3; sixteen participants oversaw the presentation of the 2020 budget and listened to reports outlining the past year’s events.
Despite a late start to the year, and having to deal with Covid-19 restrictions, the association, under the working name of artPontiac, held four impressive shows at the Stone School Gallery in Portage-du-Fort. As well, six courses were given over the late summer and fall, plus a free family art day called Under the Waves. A highlight of the year was the InterconneXion print making day, held on Main Street in Shawville, where 7 artists created large wood cut prints using a steamroller as the printing press, while the public watched the process; a videographer recorded the event.
A new board of directors was chosen with four members returning and one new nominee. Directors for the 2021 season are Genevieve Has, Nicole Lavigne, Claire Taillefer, Linda Girard and, newcomer, Michele Gagnon. France Lamarche was named Volunteer of the Year 2020.
President Louise Guay retired from the board of directors. “After nine years of volunteering with the Pontiac Artists’ Association, I’m retiring. I’m already a little nostalgic thinking about all the projects we created together but I’m sure there will be many more great artistic projects to come. Thank you to all the volunteers; without you nothing would be possible. I am leaving, but I am leaving you in good hands,” she said.
During the question period at the end of the meeting, a discussion was held about the financial challenges faced by the association this year. The financial statement showed a small loss, due to lower revenues and memberships, caused by Covid-19 restrictions. The association relies heavily on grants and other funding
to accomplish their many programs. This year they received funding for their summer student and, more recently, a co-ordinator for the Gallery for the past 6 months; they also received a grant from the Conseil des arts et des lettres du Québec (CALQ) enabling them to pay the artists that participated in the InterconneXion project. However, according to outgoing president, Louise Guay, “You never know if the grant proposals will be accepted. We have two applications out for next year, but, nothing is certain. And, we have the winter’s heating bills
to pay at the Gallery.”
Jane Toller, MRC Pontiac warden, noted she would be discussing funds for artists in 2021 at the MRC’s plenary meeting on December 9 as well as putting out a reminder that the MRC is looking to purchase art works for their collection.
The meeting ended with a fitting quote from Ms Guay: “Long live artPontiac!”