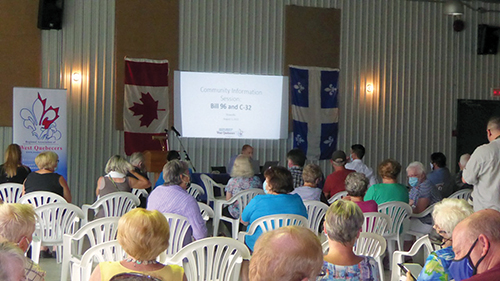 About 200 people, through zoom and in person, participated in a RAWQ info session on Bill 96
and C.32.

SHAWVILLE – There were few empty seats among the socially-distanced 120 chairs set up August 3 in the Agricultural Hall at the Shawville fairgrounds for the Regional Association of West Quebecers’ (RAWQ) community information session on Bill 96 and C-32.
Jeanne Nivischiuk, recently appointed RAWQ executive director, welcomed participants.
Arthur Ayers, RAWQ board president, gave an overview of the bills. Bill 96, “an act respecting French, the official and common language of Quebec,” proposes changes to the 44-year-old Charter of the French Language, commonly known as Bill 101. The new legislation proposes adding two clauses to the Canadian Constitution Act of 1867 under the section on “fundamental characteristics of Quebec”: “Quebecers form a nation” and “French shall be the only official language of Quebec. It’s also the common language of the Quebec nation.” It also proposes, in its 100 pages and 201 articles, changes to the Charter of Human Rights and Freedoms and the Civil Code of Quebec, among other statutes.
The Coalition Avenir Québec government argues changes are needed to protect the “vitality and future of the French language in Quebec”, pointing to studies the Office québécois de la langue française conducted that find the use of French is on the decline. As a consequence, the bill increases the
difficulty of using English in the province, notably for businesses and government
services. It also proposes that municipalities with less than 50% Anglophones be stripped of their bilingual status, which requires them to offer bilingual services, unless they pass resolutions to keep it.
Bill C32 is proposed federal legislation intended to increase protection of French in Canada as part of a big overhaul of the Official Languages Act.
André Fortin, Pontiac MNA, assured listeners that he would take their concerns to Quebec City and criticized Bill 96 as a political tool aimed at pitting one group against another. Among the numerous
concerns he has was the absence of any provision to support businesses with 25-50 employees that will now be required to operate in French. The effect on English-language services is also an area he will examine closely. Limiting the proportion of Francophone students in English CEGEPs
to 17.5% of the overall student population and prioritizing Anglophone students during admissions was another red flag for Fortin. “The language you speak at home shouldn’t be any concern of the government,” he said.
Another speaker, Jacques-Cartier MNA Greg Kelley, official opposition critic for relations with English-speaking Quebecers, emphasized “This is just the beginning. Hearings on the Bill will start in the
fall. Write letters to the premier and other ministers. They need to hear from you!”
The need to take action and speak up was repeated by others, including MRC Pontiac Warden Jane Toller. “We absolutely need to keep hammering on this,” she said, suggesting a petition. She criticized the bill as “a dangerous experiment” and “a limitation to growth because people will hesitate to invest”.
Toller and others, including RAWQ board member Chris Judd and local francophone businessman Stephane Landry, pointed out that the bill limits francophones in their choices for education as well as in their business practices. “I don’t think government should have a say in the way businesses operate, including language. The bill doesn’t promote French, it just impedes English,” Landry said.
One positive aspect of the legislation is that it proposes free French language courses for all. Currently, immigrants have access to government-funded French courses under Bill 101, but Anglophones born in Canada do not.
More than 60 people signed up to attend the meeting virtually, but technical problems made it a frustrating experience. “RAWQ has further plans to provide a better-quality production to a virtual audience and are working on another in-person session in Wakefield,” concluded Nivischiuk.