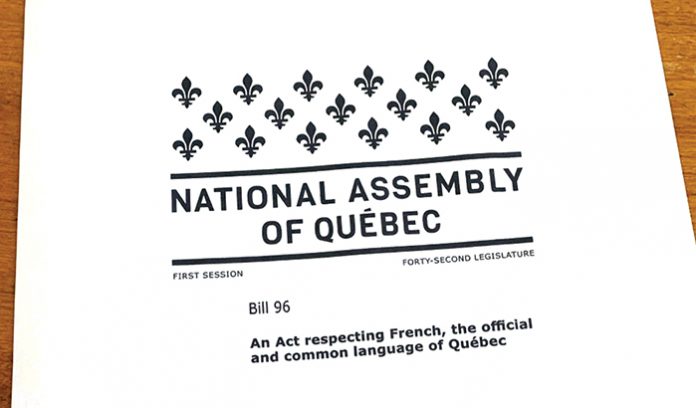 QUÉBEC – In a vote that lasted only minutes, Quebec’s majority government approved the controversial Bill 96 at the National Assembly on May 24. The new law, titled An Act Respecting French, is set to overhaul the Charter of the French language by reforming several pieces of legislation within the province. Education, health care, immigrant rights, and privacy in the workplace will all be affected by the bill.

Regarding education, the new law will ensure the number of students in English-language CEGEPs cannot be higher than the year before, nor can it exceed 17.5% of the overall student population in the province. The new requirements for English CEGEP students include having to take at least three 45-hour courses in French.

Regarding health care, government entities must now use the French language unless health, public safety or the principles of natural justice require agencies to speak another language. The bill also states government agencies cannot make systematic use of that other language. The federal Canada Health Act guarantees access to care; if Bill 96 were to infringe on that act, the federal law would override it. Concerns the law will hinder medical professionals to speak with patients in any other language has been rejected by the provincial government.

Under the new law, refugees and immigrants moving to Quebec would have access to services in English or another language for six months after their arrival. After the six-month period, all government services will be exclusively in French, unless it falls under one of the exceptions mentioned about health and safety. If a government worker is offering services to refugees or immigrants, they are obligated to do so in French.

Quebec’s language office now has the authority to investigate businesses if there is suspicion, they are not operating in French. The law used to oblige businesses with 50 employees or more to use French as the common workplace language; now, small businesses with as few as 25 employees must be utilizing the province’s official language. Businesses must also have a French committee and a government issued certificate validating their common use of French in the workplace. Government language inspectors will have the power to raid offices and search private computers and phones to ensure operations are being carried out in French.

Thousands across the province were protesting the bill in recent weeks, claiming it impedes on the rights of anglophones, allophones and Indigenous communities. Quebec Premier François Legault and Simon Jolin-Barrette, the minister responsible for the French language, both defended the bill after the protests, claiming the demonstrators’ fears are unfounded. In a statement posted on his official Facebook page, Legault stated, “It is my responsibility as premier of the only government in North America representing a Francophone majority to ensure that French remains our only official language, our common language.”

The bill’s use of the notwithstanding clause has been highly criticized, as it gives power to a province to override basic freedoms guaranteed by the Canadian Charter of Rights and Freedoms. The Quebec government has applied the clause to the entire bill, making every aspect of the extensive law insusceptible to legal opposition based on the charter. The legislation is now exempted from compliance with Canada’s Constitution. “We continue to look very carefully at what the final form of this will take and we will base our decision on what we see as the need to keep minorities protected across the country,” Prime Minister Justin Trudeau told reporters.