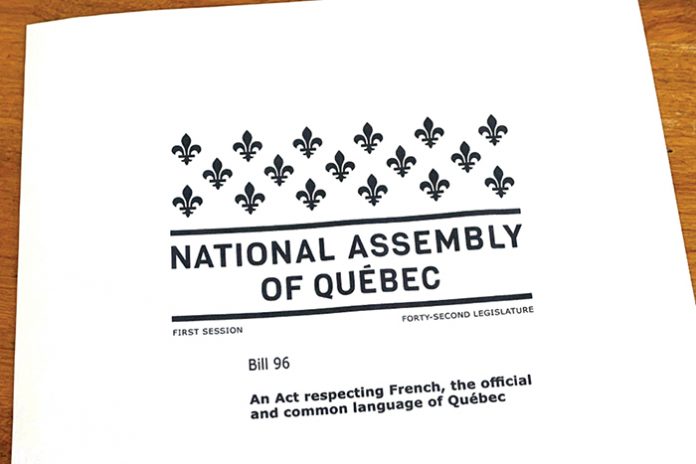 QUEBEC CITY – The controversial Bill 96, centred on rebuilding the Charter of the French Language and currently undergoing review and revision, had required students in Quebec’s English CEGEPs to take three of their core courses in French, along with passing a standardized French exam to graduate.

The Official Opposition critic for the protection of the French language, Liberal MNA Hélène David, requested this amendment to the bill. It was adopted unanimously by the committee studying the bill. After backlash fromthe English educational institutions themselves, the Liberal Party backtracked on the proposal.

The CEGEPs were concerned the course of action would lower the grade average of students and increase the potential to fail. According to Liberal leader Dominique Anglade, the bill is unacceptable. “They finally came to the same conclusion when we told them we couldn’t let students fail,” she said.
“But it doesn’t solve all the problems related to Bill 96.”

Anglade apologized to the anglophone community for the misguided amendment, initially introduced in February, acknowledging the party’s error in suggesting the requirement. She admits her own party should have consulted with English CEGEPs before proposing the amendment. While she claims the idea was proposed in good faith, she is adamant the Liberal party will be voting against the bill, saying they cannot support the CAQ government’s plan for its adoption. At the National Assembly, Anglade told reporters this is hopefully behind them as they move forward. “We will be talking with the English-speaking community and defending the rights of every single Anglophone,” she stated.

Bill 96 is a point of contention in the English-speaking community and in Indigenous communities, indicated by the creation of two new political parties as alternatives to both the CAQ and the Liberals.

At the provincial election this fall, anglophones in Quebec will have the additional choices of former Montreal mayoral candidate Balarama Holness’ party, Mouvement Quebec, as well as the new Canadian Party of Quebec.

André Fortin, Pontiac’s MNA, stated Bill 96 is not in line with the Pontiac’s wishes, claiming it is an ill-advised and deeply divisive piece of legislation that will miss the mark on protecting the French language. He said the bill will have a significant and long-lasting effect on the Pontiac. “It is not reflective of our community that proudly lives by the principle of ‘vivre-ensemble’. The Bill will limit a host of services to Anglophones, and opportunities for Francophones to learn English in CEGEP. It will impose roadblocks on our small businesses.” Fortin noted he will be proudly voting against Bill 96 and that the Liberal Party will be the only party in the Assembly to do so. “I am not interested in that type of politics, nor in that type of government.”

The Coalition Avenir Quebec (CAQ) government is revising the proposed bill. With their latest sub-amendment, students will have the choice between taking three core courses in French or boosting the number of second-language French courses they take from two to five. These five courses are to be done over the average four semesters’ students take to complete their pre-university program. While this change is considered somewhat less onerous many parents and educators continue to express
concerns for Anglophone students’ success rates.

If Bill 96 is adopted, changes to the CEGEP curriculum would come into effect in fall 2024.