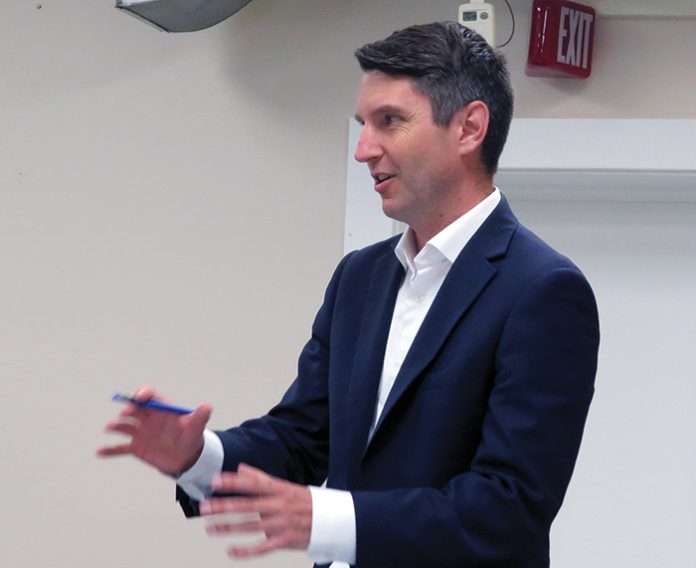 Andre Fortin speaks to business owners in Shawville about Bill-96.

SHAWVILLE – A concerned group of Pontiac business owners gathered in Shawville, on Monday, June 20, to ask MNA André Fortin questions about the implications and responsibilities of Bill 96. Recent amendments to the Charter of the French Language (CFL) began taking effect on June 1 throughout Quebec, and the meeting was “an opportunity to combat disinformation and uncertainty by having the requirements explained to us,” explained one of the organizers.

Just over a dozen people attended the meeting including local business owners who are deeply concerned about predicted adverse economic consequences. “The bill is written in such a way that it is unclear in many places,” cautioned Fortin. “There is much room for interpretation, and the government is giving a lot of power to the people who work in enforcement. Economic consequences are inevitable.”

Bill 96 imposes higher penalties for infractions, and businesses will have to follow stringent signage rules and restrictive communication requirements. Should a non-compliant business wish to contest a citation, all communication and documents submitted to the court will need to be in French. “There will be serious delays in the court system,” Fortin predicted.

The bill requires all businesses to display a French translation of their company name, with no exceptions made for large companies with longstanding, recognizable, trademarked names. “There are a lot of what the bill refers to as ‘Historic Quebec Anglophones’ in our area, and many of these business owners are going to incur significant expenses trying to follow the new laws. However, they will not receive any financial assistance from the government in helping them comply,” Fortin explained.

Fortin predicts Bill 96 may dissuade larger corporations from investing in Quebec. “Businesses that have more than 25 employees will be subject to very strict rules concerning their internal communications.” When asked if the government would distinguish between part-time and full-time employees, Fortin responded, “The bill just mentions the number of employees.”

In its expansion of the law, the Quebec government is giving language compliance inspectors the right to seize a company’s computers, without a warrant, to study their internal communications. “They may do so without a judge’s mandate,” Fortin explained. “Legault’s government is investing an additional $100 million into the Office québécois de la langue française to expand their investigative capabilities. The expansion of search and seizure power is deeply troubling,” Fortin admitted.

Fortin addressed up-coming changes affecting English-speaking individuals living in Quebec. “Quebec residents will be restricted from accessing services, including education and most government interactions in English,” advised Fortin. While healthcare and emergency services are still ostensibly protected and will remain accessible in English, individuals wishing to maintain the right to receive services in English must register as “Historic Quebec Anglophones.” However, Fortin indicated the Quebec government will no longer be required to provide forms in English, and registered anglophones will be required to verify their status when speaking to any government agency in English. “Reporting an outage with Quebec Hydro in English could be an inconvenient experience,” he said.

Educational opportunities for English speakers are now capped at CEGEP colleges. “People speak English in business settings all over the world, and there are francophones who are going to find it difficult to access educational opportunities in English,” noted Fortin. “Implementation of the new legislation comes at an inopportune time,” he added.

“Businesses haven’t recovered from COVID-19, families are having trouble paying bills, and our hospitals need investment, but instead the Quebec government is making policing the language we speak a priority. Premier Legault is using language as a tool to foment a hostile environment toward English speakers, and it will hurt the economic prosperity of the entire province,” Fortin concluded.