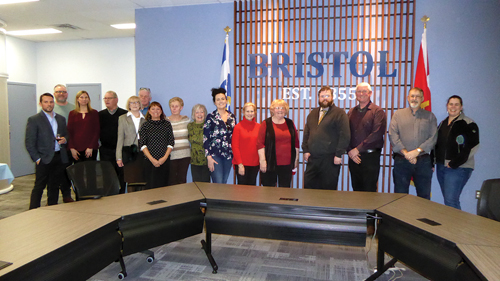 BRISTOL – The Municipality of Bristol celebrated the official opening of its newly
renovated offices, council meeting area and library on February 5. Warden Jane Toller attended and congratulated Bristol on the improvements and accessing funding. The $170,000 cost of the renovations was evenly shared between
the municipality and federal and provincial governments.
The municipal office was reorganized to allow more efficient use of space, including enclosed offices for more privacy. The council “chamber” now occupies an open area beside the office.
The library was moved to where the council chambers were, towards the back of the building, with a separate entrance. The library’s hours were increased considerably and it’s now open 16 hours a week. “Longer hours make it much more convenient for people to access the facilities. The internet gets good use for research and homework assignments. People really like the new space, which is bright and airy. We now have a book drop off for returns when the library is closed, which is also appreciated,” said librarian Sheila Watt.
Bristol’s next major project is the rejuvenation of MacLellan Park at the waterfront in Norway Bay. Phase one, focusing on the parking area and walkway to the beach, is set to begin this year.
Toller also attended the municipality’s council meeting on February 3 as part of her Pontiac council tour and to promote the energy–from-waste project which would accept waste from the Pontiac and surrounding areas to transform into electricity. Bristol is a possible location for such a facility.