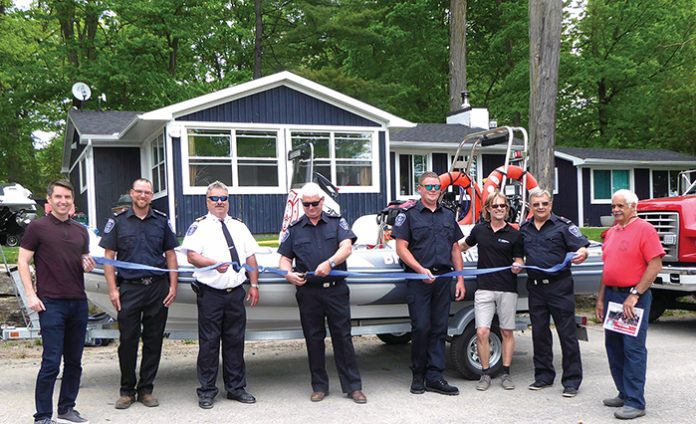 The official ribbon-cutting of Bristol’s new rescue boat happened on May 21. Many were present in the event including: Pontiac MNA André Fortin, Bristol firefighter Alex Mahon, Fire Chief Kevin Kluke, Bristol Mayor Brent Orr, Daniel Johnson, Christian Larouche of Liberty Boats, and firefighters Ken Bernard and Gérard Laferrière. Fire department members were also busy serving free hotdogs and refreshments as a gesture of appreciation to the community that has donated $30,000 since the fundraising began less than a year ago in July 2021. “The community really stood behind us on this project,” said Ken Bernard, one of the leaders of the project. The Bristol fire department launched the rescue boat project to fill a gap in water rescue services between Mansfield and Gatineau. Eight Bristol firefighters have successfully completed the 4-day certification course for water rescue. Alex Mahon and Matt Lottes are the team leaders. Any rescue effort requires 3 or 4 trained personnel. MNA André Fortin congratulated the fire department for their work, saying that being a volunteer firefighter is a true definition of public service.