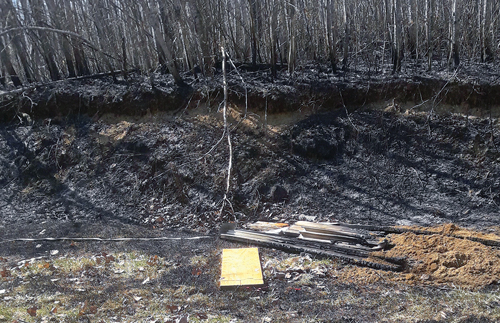 The Otter Lake and Thorne fire departments responded to an Otter Lake bush fire on May 6.

MRC PONTIAC AND MUNICIPALITY OF PONTIAC – The Otter Lake and Thorne fire departments responded to a bush fire that affected about two acres in Otter Lake, May 6. Water-bomber planes responded in case assistance was needed because of the high winds, but weren’t used.
According to Denis Chausse, Otter Lake and Thorne fire chief, the blaze started while the property owner was doing renovations. He was cutting ceramic tile outside and a spark ignited the grass. “The owner didn’t notice and went inside to install the tile. When he came back, he saw the grass was on fire and tried to extinguish it, but the wind was too bad and the fire went to the bush,” he explained.
The Shawville Clarendon Fire Department responded to a bush fire that affected about an acre on April 28.
An early spring and low humidity has resulted in a much higher number of spring forest fires than usual, so the Société de protection des forêts contre le feu (SOPFEU) and Ministère des Forêts, de la Faune et des Parcs have banned open fires in or near forests in a number of regions across the province, including the Pontiac.
“This ban on open fires is intended to preserve SOPFEU’s operational capacity and that of municipal fire departments during the COVID pandemic by limiting the risk of spreading the virus when firefighters respond to alerts,” said SOPFEU in a press release.
There have been 72 forest fires covering an area of 42 hectares this year across the province. The average for the last ten years at this time is 42 fires and 23.7 hectares affected. Nearly half of the fires were caused by residents losing control of a fire while burning grass or waste. “Brush and dead grass are highly flammable. It only takes a few hours of sunshine and a little wind to dry out the brush and increase the danger of fire,” said SOPFEU.
The Municipality of Pontiac and municipalities of the MRC Pontiac are adhering to the ban, but some, like Litchfield, Shawville, Mansfield, Otter Lake, Fort-Coulonge, and Campbell’s Bay are allowing small fires in units with protective screens; Thorne and the Upper Pontiac’s municipalities have a complete ban in place. In some instances, residents are required to obtain permits from their municipality and some municipalities, like Mansfield, only allow fires in store-bought appliances. Residents are advised to consult their municipality regarding specific rules and regulations.
If fires get out of hand and require the fire department to respond – even if residents had a permit – they are responsible for paying for the response, which is typically over $1,000.
Chausse explained how the COVID crisis has affected fire departments: when fire fighters arrive at the station, they cannot enter to get dressed until the fire truck drivers have left. Everyone then follows in a large convoy in their own vehicles. When on scene, firefighters try their best to maintain a 6 foot distance from others. “It’s tough, but we’re doing it,” said Chausse, noting the precautions have lengthened response times by a few minutes.