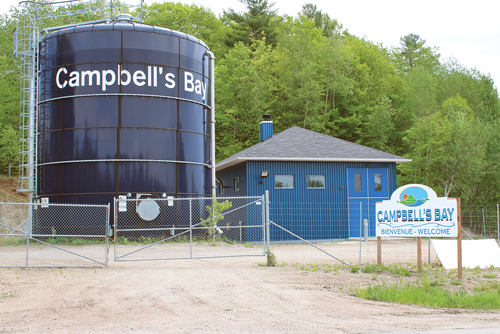 CAMPBELL’S BAY – The municipality issued residents a water non-consumption notice and advised them to purge their residential water systems on May 19 after discovering chlorine used at the water treatment plant was potentially contaminated with an unknown chemical product. The treatment plant was bypassed until testing results were obtained.
A “definitive statement” from the mayor and municipality was posted on Facebook, May 24, releasing the test results showing the water system wasn’t compromised at any time, although the chlorine was in fact contaminated. The non-consumption notice was changed to a boil water advisory the same day because three consecutive water tests are required to ensure safety of the water supply; it was expected to be lifted by June 1.
Mayor Maurice Beauregard credited quick action on the part of an employee for
averting contamination of the water supply system. Beauregard said chlorine is sent to the municipality in sealed containers in a batch of 30. The employee opened one of the 20 L containers, labelled chlorine, and in mid-pour smelled an unusual odour, stopped pouring and shut down the water system immediately. The product didn’t leave the initial vat and never entered the water system. Testing confirmed the jug contained a “high volatile petroleum-based product that has compounds similar to those found in paint thinner or other similar products”.
It was the only container that was mislabelled, and as far as Beauregard
is aware, no other organizations have experienced a similar problem. The supplier hasn’t yet answered the question of a recall said Beauregard, and regarding
seeking compensation, he indicated they are “waiting on test results and an official response from our lawyer.”
While awaiting water testing, municipal staff and firefighters distributed bottled water to residents and advised them to purge their home supply by running the tap for 10 minutes and emptying the hot water tank. The cost of providing 325 cases of bottled water/day for the five days amounted to about $8,000 said Beauregard. The total cost of the problem is estimated to be about $20,000, he added, due to testing and wage costs for municipal workers and firefighters.