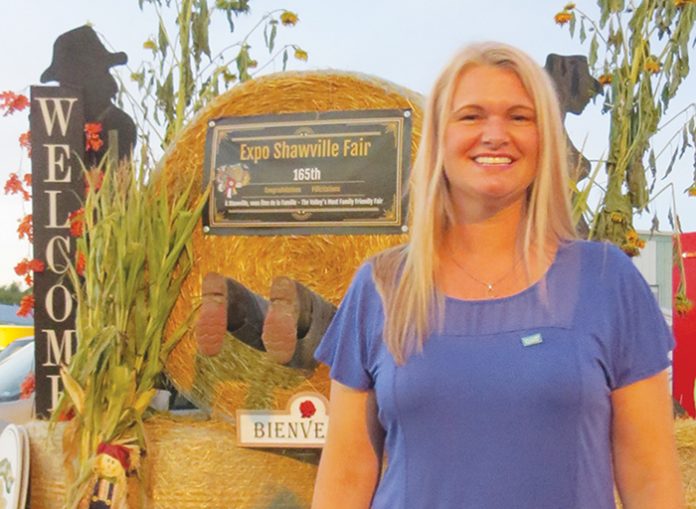 Corinne Canuel-Jolicœur is representing the CAQ in the upcoming provincial elections. She is vying to represent the Pontiac. She is pictured at the Shawville Fair, where she was on Saturday. She has “never missed a year of the Shawville Fair.”

MRC DE PONTIAC – The current ruling provincial party, Coalition Avenir Québec (CAQ) has named Corinne Canuel-Jolicœur as their party’s Pontiac candidate in the upcoming election. The candidate described several issues that require a proactive approach, with healthcare among the top issues. “It is imperative that we maintain a hospital in Shawville,” she stated. “The Shawville hospital is a definite priority. It needs to be decentralized. And, the people who work there, including non-medical staff, need to be paid more.”

There are other important strategies that Canuel-Jolicœur believes will help the Pontiac. “We need to improve the educational offerings and economic opportunities in this area, and this includes further developing our internet capabilities and infrastructure.”

Even though she believes educational opportunities need improvement in the region, she does not believe cost is an issue. “Quebec has the cheapest education in Canada,” she stated. And, she also doesn’t believe language is an issue: “Bill 96 has created some concerns in the Anglophone community, but I don’t see the issue. Anglophone kids can still study in English — the Anglophone community has always been entitled to this.”

CEGEP registration is also not a problem for Anglophones, according to Canuel-Jolicœur. “Registration for Anglophones is already set at a number that accommodates more than the percentage of the population entitled to education in English,” she noted, adding, “We have to protect French.”

Housing is another important issue for the CAQ candidate. “Everyone needs a decent place to live. Across the province $1.8 billion has recently been allocated for this priority.” According to Canuel-Jolicœur, “The money should be distributed following an analysis of local needs. It’s important to listen to people’s ideas,” she stated. (See related article, page 7)