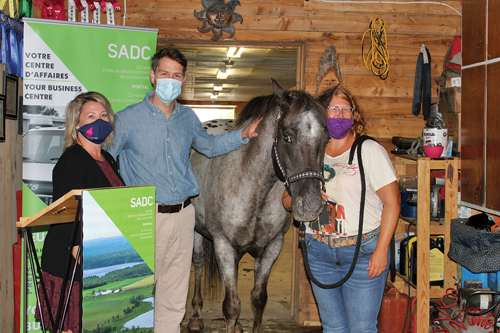 SHAWVILLE – On September 2, Members of Parliament across the province visited businesses that benefitted from the Regional Relief Fund, which the federal government implemented in June in collaboration with the Network of Community Futures Development Corporations (SADCs) and Community Business Development Centers (CAEs). In the Pontiac federal riding, MP Will Amos visited GELAM Riding Stable outside of Shawville. The event was also held to highlight female entrepreneurs, like GELAM owner Ginger Finan.
“This funding is crucial for our community and demand has been high,” said Rhonda Perry, SADC director general, noting the Pontiac SADC received $965,854 that has so far touched 183 businesses, 81 of which are owned by women, through loans or services like online training or business coaching.
The fund is dedicated to businesses that don’t qualify for other government aid programs and so far 23 Pontiac business received loans up to a maximum of $40,000. If repaid by 2022, the loans are interest free and $10,000 doesn’t have
to be repaid.
Finan received a $40,000 loan and explained how it and the Pontiac SADC helped her business during the pandemic, which has turned out to be her best year yet with high demand for lessons and summer camps.
“When I was approved, day camps and riding lessons were still closed so
I was panicking about how I was even going to feed my horses without revenue. When I was approved, it was a huge relief. Afterwards when we were told day camps could open, the surge in business came and what originally would have kept me in business turned into what helped me grow,” she explained.
Finan used the funds for fencing, purchasing additional horses, feed and an automatic water feeder, installing a sun shelter and an additional riding ring, among other things. “I was able to make some smart choices with things that are really going to help me out for years to come,” she said.
Amos explained that once the money is repaid to the SADC, it can be loaned to other small businesses. “There will be a permanent recycling of the funds, so what helped Ginger expand will help another business. Some businesses aren’t able to expand like Ginger has right now, some just need it to survive, but so much the better because we want our businesses to survive and thrive. It’s a real win-win,” he said.
Finan was also able to hire five employees over the summer, one funded through the Canada Summer Jobs program (100% of wages covered).