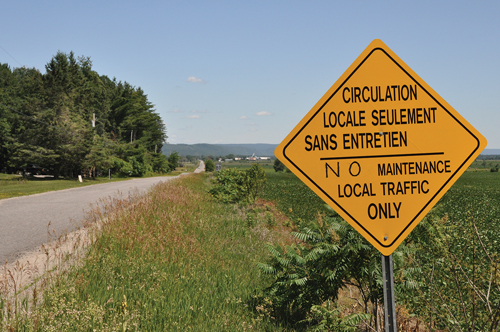 Chemin Steele had been dangerously ridden with potholes for years. Signs warning users of the road’s condition were installed the day after a septic truck broke an axel and ended up in the ditch. Repairs to one section began last week.

MUNICIPALITY OF
PONTIAC – Residents of Chemin Steele and those who use it have endured a dangerous, pot-hole filled road for years, but work on one section is expected to be completed soon.
The municipality held a virtual meeting July 7, and approved a resolution to repair 200 meters of the worst section of Chemin Steele, which is about eight kilometers long. Work is budgeted at $80,000 and work to excavate the section began July 10, according to Maxime Renaud, coordinator of civil engineering in the Public Works department. Re-surfacing is supposed to follow later this summer.
In June, a septic tanker travelling the road broke an axle and ended up in the ditch, narrowly averting spilling raw human sewage into the fields; the trucker
is considering suing the municipality. Signs indicating the rough road ahead were erected the day after the accident.
Eric Fletcher, a resident along the road, said he welcomes speedy, temporary repairs, especially on the roughest 200 meter section, to prevent another serious accident. “However, any permanent solution will need to include improving the north side ditches to allow water to drain out via Mohr Creek. Water sitting in the ditch along the roughest parts of Chemin Steele
saturates the roadbed and creates potholes every year,” he said.
The road was last paved in 1989 by spreading a thin layer of pavement over a gravel bed, all directly on an under-bed of clay loam.
The current work includes digging down half a metre, putting in crushed stone, then gravel and re-paving.
Over the years, the municipality has said finances and preoccupation with the extreme floodings have delayed road repairs. As of press time, the mayor and municipal administration did not respond to the Journal’s inquiries.