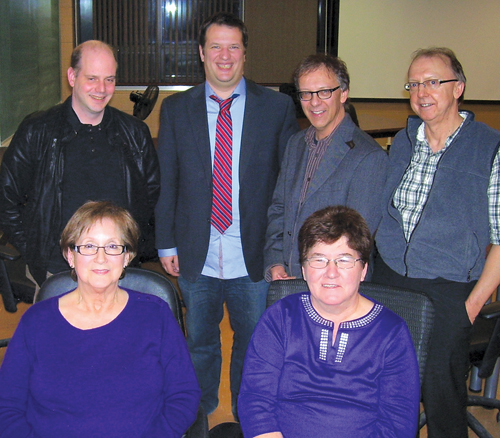 CAMPBELL’S BAY – CHIP-FM held its annual general meeting in the Community Learning Centre, November 20. Station employees, volunteers, and some board members were in attendance. Michel Bélanger, president of the non-profit organization, stated that the station “has greatly increased its on-air        product.”
According to the 2012-2013 activity report, CHIP-FM successfully pulled through a crisis period that began in August 2012, which involved employee conditions, program quality, overall image, and a loss of $4,626 for that fiscal year. “We are very pleased now with the professionalism of the French-language programming,” commented board member, Rose-Marie Bertrand.
Personnel restructuring included hiring a new director general as well as two employees, who have deejay backgrounds. Internal production and editing of new local, regional and national content added 35% more hours of programming to the weekly schedule, with an emphasis on bringing credibility to the station’s news reporting, information and musical selection.
Budget restraints, new funding partners and salary reductions contributed to a $10,360 profit in the station’s total revenue of $510,827 of which $77,018 is from government grants; $102,536 from local and national advertising; and $292,364 from the popular ‘CHIP Bingo’ that awarded the participating public $126,575 in prize money during the 2013 fiscal year. CHIP-FM also spent $4,277 on self-promotion.