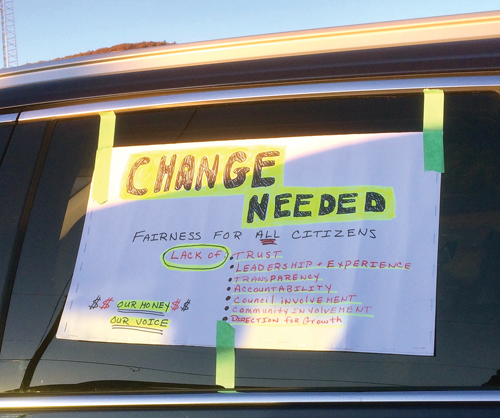 MUNICIPALITY OF PONTIAC – Over a dozen vehicles displaying various signs circled the Town Hall in Luskville blaring their horns prior to the October 13 council meeting demanding the resignation of Mayor Joanne Labadie, some councillors and municipal staff members.
A group of anonymous residents has been circulating a petition on Facebook and in local businesses calling for the resignations. The group alleges mismanagement, a lack of transparency, conflicts of interest, unanswered questions during recent meetings, and misconduct as the reason for the petition, among several other things. One member alleges that Labadie knew about the poor condition of the culvert that washed out and killed a local woman on Bronson-Bryant Road during the 2019 spring floods.
“I swore an oath to serve citizens, uphold laws, and abide by a code of ethics, which I’ve done. Anyone who feels I’m in breach of the code of ethics, have committed fraud, corruption or acted in self-interest can launch a complaint with the Commission Municipal du Québec,” said Labadie. “I strongly reject all accusations made against me and my colleagues; they are grossly slanderous, defamatory, and in my opinion, politically motivated,” she added.
The online petition has garnered about 70 signatures to date but others have been collected via paper. One member, who uses the pseudonym Mick Mars, says over 300 people have signed the petition, but according to Labadie, nothing has been presented to council.
The complainants have said they wish to remain anonymous to avoid being reprimanded by the municipality.
This is the latest in an ongoing tug of war between factions in the municipality, a conflict which has been active long before the current administration.