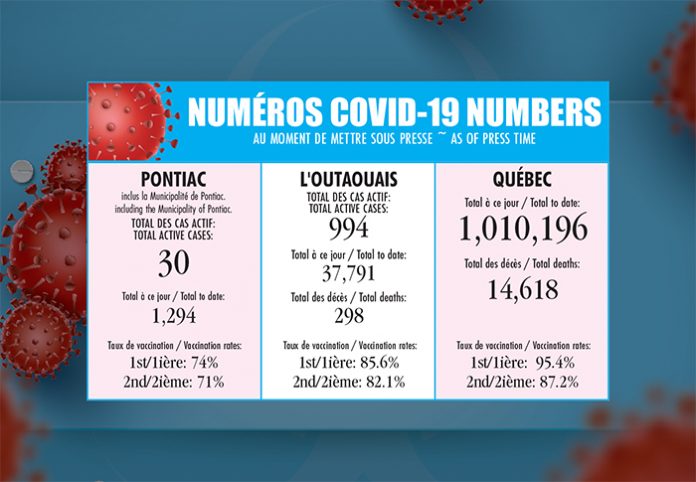 QUEBEC – With infection and hospitalization rates soaring, mainly driven by the Omicron variant and its BA.2 subvariant, the Canada’s National Advisory Committee on Immunization and Quebec’s public health department are strongly recommending that all adults and immunocompromised children aged 12 to 17 get a COVID-19 booster shot, which means a fourth dose in some cases.

In a press conference on April 13, Dr. Luc Boileau, Quebec’s interim public health director, encouraged Quebecers to be extra cautious at Easter gatherings, especially with those 60 and older because they are at higher risk, and not to gather with those who had symptoms, even if they weren’t testing positive.

Although Quebec’s mask mandates were supposed to be lifted in mid-April in most public places, Quebec has prolonged the requirement until at least the end of April due to the arrival of the sixth wave.

Since April 11, fourth doses are available to those aged 60 and older, following the 70+ group and those suffering from chronic conditions.

“An interval of 5 to 6 months is recommended, but a person can receive [the fourth dose] if a minimum of 3 months is respected [after the third dose],” says the provincial COVID website.

Appointments can be made online at Quebec.ca/vaccinCOVID of by calling 1-877-644-4545 for those experiencing technical difficulties.

Recently, the government reversed its decision to reduce the amount allocated to pharmacies for COVID vaccinations by $5 per person, an action that prompted many pharmacies – including Familiprix Marc Aufranc in Shawville – to consider not offering the vaccine because it wasn’t financially feasible.

The about $17 previously awarded is now once again in effect.

On April 8, Quebec provided new advice on how to use rapid tests, which involves swabbing the mouth (inside of the cheeks) first and then the nose to boost rapid-test sensitivity. However, residents can continue to opt for swabbing only their nose, since the increased sensitivity is only slight.

Officials are also stressing proper testing protocol, which means taking two tests at least 24 hours apart when symptoms are present; if the result is positive, the person must follow self-isolation procedures, and if negative, they should self-isolate and do a second rapid test 24 to 36 hours later. If the result is still negative, they can resume normal activities while following health protocols.