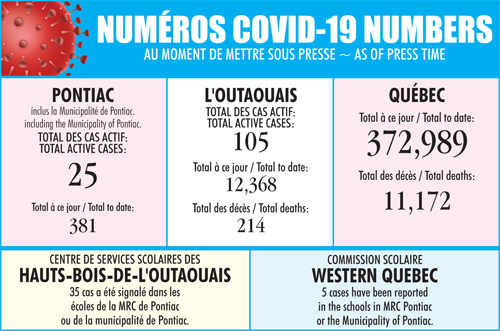 QUÉBEC – On June 14, the Outaouais moved to the pre-warning level (yellow zone) due to decreasing cases, hospitalizations and outbreaks.
Consequently, indoor gatherings at private homes are limited to occupants of two different residences (with distancing and wearing a mask) and outdoors there is a maximum of eight people from different households or all occupants of two households. Places of worship can have 250 people (50 for funerals or weddings). Bars, breweries and casinos are open with restrictions (no dancing, 50% capacity, customers remain seated, etc.). In restaurants, occupants of two residences can share a table.
Nearly two months after an order banning non-essential travel between Quebec and Ontario went into effect, both governments annou-nced on June 14 that travel restrictions between the two provinces would end at 12:01 a.m, June 16. The border closure began April 19.
ESSC closed
After several cases were confirmed among students at École Sieur-de-Coulonge in Mansfield, it was closed on June 8. “As cases are progressing rapidly, the school will be closed until June 21, 2021 inclusively. Students and their families must remain in isolation and are encouraged to get tested,” said the notice from Centre de services scolaire des Hauts-Bois-de-l’Outaouais. A temporary testing clinic was set up at the school on June 8 to allow students, staff and their families to be tested. Students are receiving distance education.
Quicker second doses
Québec has cut the wait time between the first and second doses of the COVID-19 vaccines from 16 to 8 weeks. Adults are able to progressively reschedule their appointments for their second dose of the Pfizer and Moderna vaccines starting June 7 for those 80 and older; by June 23, everyone 18 and older can rebook. The interval for AstraZeneca’s vaccine was shortened a couple weeks prior, but only those 45 and older are eligible due to concerns about a rare blood-clotting condition.
Second dose appointments can be rescheduled online at www.clicsante.ca or by calling 1-877-644-4545.
However, due to shipment delays, booking a second dose of Moderna has been difficult. “Since it’s recommended that the second dose be the same vaccine as the first, the option to advance the second dose depends on the availability of vaccines. For the moment, only Pfizer’s vaccine has been delivered in sufficient quantities to allow for the advance.
Appointments that have already been scheduled will be honoured and the necessary doses for all vaccines will be available,” said the Ministère de la Santé et des Services Sociaux (MSSS) in a notice on June 7, noting that future shipments of Moderna should be confirmed shortly, allowing advance second shot appointment slots to be added.
Walk-in vaccination
Walk-in vaccination for the first dose of the Moderna or Pfizer vaccines became available at all Outaouais vaccination clinics on June 2. The Campbell’s Bay RA Hall offers this service on Wednesdays from 11 a.m. to 6 p.m., Fridays from
4 p.m. to 6 p.m. and Saturdays and Sundays from 9 a.m. to 2 p.m.
People can receive their second dose of the AstraZeneca vaccine
exclusively without an appointment at the Campbell’s Bay vaccination site on Wednesdays until 6 p.m., Fridays from 5 p.m. to 6 p.m. and Saturdays and Sundays from 10 a.m. to 2 p.m.
A number of mobile clinics were offered in the Pontiac for residents to receive the first dose of the Pfizer or Moderna vaccines with or without appointments:  Club de l’Âge d’Or de Fort-Coulonge – June 3; Harrington Hall in L’Isle-aux-Allumettes – June 6; Otter Lake Community Center – June 8; Shawville arena – June 9.
According to Patricia Rhéaume, Centre intégré de santé et de services sociaux de l’Outaouais (CISSSO) spokesperson, these communities were chosen because of their lower vaccination rates. “In the Pontiac, the overall vaccination rate is 56.1% in comparison to 61% for the whole Outaouais region,” she said, noting other mobile clinics may be organized in the future.
On June 3, CISSSO announced the arrival of a Vaccibus, loaned by the Société de transport de l’Outaouais (STO), that will allow the organization of mobile vaccination clinics in order to reach populations where vaccination coverage is less optimal or high volume commercial parking lots. The Vaccibus was used a couple of times for the mobile clinics offered in the Pontiac.
Masks in schools
In the context of the heat wave currently that affected Québec and following a recommendation from public health authorities, the MSSS announced that elementary and secondary students in orange regions will no longer be required to wear masks in class, starting June 8.
However, students will still have to wear masks in common areas, hallways and on school buses.