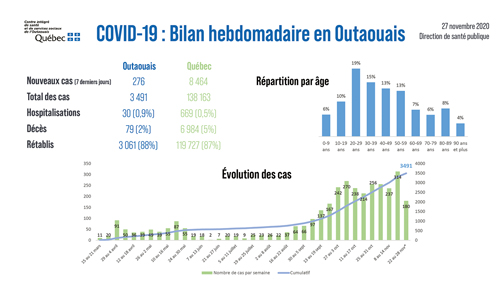 QUÉBEC – On November 19, Premier Francois Legault laid out the
rules for the Christmas season and extended the province’s red zone restrictions for another month.
Private gatherings of up to 10 people will be allowed for a four-day period from December 24 to 27 providing the pandemic does not worsen. Attending two of such gatherings is permitted, and attendees are asked to keep a two metre
distance from members of different households. Work Christmas parties are banned and New Year’s celebrations will be limited to members of the same household.
In exchange, the government is asking Quebecers to comply with a “moral contract” to self-isolate for one week before and after the four day holiday period.
Consequently, primary schools will close on December 17 and reopen
the first week of January. Secondary schools will also close December 17, but will return a week later on January 11. Material will be sent home with the
students or they will be provided with distance learning via the internet or telephone. In-school daycare services will remain open for essential service workers only.
In order to facilitate the self-isolation period, Legault asked employers to be flexible around the holidays and allow employees time to isolate by working from home
or by reducing business activities.
Legault stressed that anyone showing any symptoms of the virus, even mild ones, should not attend any gatherings as well as those who are unable to self-isolate for the described periods. “It seems the isolation period is mandatory, with exception made for workers who can socially distance or wear a mask. The Premier is asking those who cannot [comply] to use their better judgement,” said Pontiac MNA Andre Fortin, noting the rules are not clear.
Premier Legault also extended the partial lock-down measures in
the province’s red zones until at least January 11; however, the Christmas exceptionis allowed. Some regions like Montréal and Québec City have been under these restrictions since October 1.
Part of the Outaouais remains in the red zone: Ville de Gatineau and MRC des Collines-de-l’Outaouais (including the Municipality of Pontiac), while the MRC Pontiac is in the orange.
Three more PD days for schools
The Ministry of Education has added three pedagogical days to
the 2020-2021 school calendar because of the evolution of the pandemic. The days will be used for training and planning to promote the deployment of distance education services as well as allow for the sharing of best practices and better planning in the coming months. Schools will send parents information about the new PD days shortly.
The numbers
According to the Centre intégré de santé et des services sociaux de l’Outaouais (CISSSO), the week of November 16 was the worst the Outaouais has experienced since the beginning of the pandemic: 314 new cases (average of 45 per day), and 464 close contacts had to be preventively isolated for 14 days.
As of press time, the Centre de services scolaire des Hauts-Bois-del’Outaouais has had a total of 13 cases within their schools, while the Western Quebec School Board has had 35. None of the cases in the schools are in the MRC Pontiac or Municipality of Pontiac.
There have been over 142,000 cases of the virus in Québec (7,056 deaths). The Outaouais has had 3,554 cases (338 active) and 80 deaths. The Pontiac, including the Municipality of Pontiac, has had 42 (<5 active) cases.