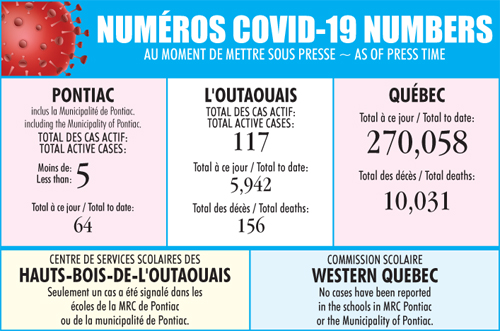 QUÉBEC – Québec Premier Francois Legault laid out new rules in a press
conference on February 2, including lifting some restrictions in place from January 6 to February 8. The new measures are expected to last until February 22, depending on how the pandemic evolves.
Across the province, non-essential stores, hair salons and museums were allowed to reopen on February 8, but for most of the province, the 8 pm to 5 am curfew will remain in place, except for regions in the orange alert zone.
Six regions were downgraded from red to orange: Gaspésie-Îles-de-la-Madeleine, Bas-Saint-Laurent, Abitibi-Témisc-amingue, Côte-Nord, Nord du Québec and Saguenay-Lac-Saint-Jean. In those areas, restaurant dining (reservations only, mandatory customer registry, and tables limited to two adults), theatres and indoor sports are allowed to resume and the curfew only begins at 9:30 pm. However, household gatherings are banned in orange zones as well.
In red zones, which include the Outaouais, small outdoor gatherings are allowed, but are limited to a maximum of four people from four different households. A maximum of eight people are allowed in orange zones.
CEGEPs and universities will gradually reopen for on-campus learning,
with individual schools coordinating the details.
Pontiac MNA André Fortin questions the reasoning behind the Outaouais’ designation: “The government mentioned three criteria to switch to orange: active cases, stabilization in the number of new cases, and impact on the hospital
system. On active cases per capita, we basically have the same number as Abitibi or Saguenay. The number of new daily cases has been roughly the same over the last two weeks and there are currently four COVID patients hospitalized in the region. What criteria justify the region being in a red zone?” he questioned.
However, the Outaouais’ health authority, CISSSO, supports the red zone
designation because the situation remains fragile. “It’s too early for the Outaouais to go into the orange this week,” said Dr. Brigitte Pinard, director of public health, listing a number of reasons: stopping community transmission, high risk in seniors establishments, delaying the introduction of new variants, and the need for stability in the number of new cases.
Increased travel restrictions
Federal travel restrictions were beefed up on January 29 when Prime Minister Justin Trudeau announced additional restrictions will come into effect “in the coming weeks” requiring international travellers to quarantine in government-approved hotel rooms at their own expense when arriving in or returning to the country.
Starting February 3, international flights arriving in Canada can only land at four airports: the Montreal-Trudeau International Airport, Toronto Pearson International Airport, Calgary International Airport, and Vancouver International Airport.

When travellers arrive, they will have to quarantine in a hotel room for up to three days until they receive results from a COVID test taken at the airport, which could cost up to $2,000 each. If negative, they are allowed to continue their 14-day quarantine at home, but those testing positive will be required to quarantine in designated government facilities “to make sure they’re not carrying variants of potential concern” said Trudeau.
Since January 7, the Canadian government has also required proof of a negative COVID test for anyone over the age of five, taken within 72 hours of departure time, before boarding flights to Canada.
In addition, Trudeau announced that airlines like Air Canada, WestJet, Sunwing and Air Transat agreed to temporarily suspend travel to the Caribbean and Mexico, which began January 30 and will continue until April 30. The airlines are organizing return travel for those already abroad.
Non-essential travellers will also have to show a negative test at land borders in the coming weeks.
Healthcare situation
On February 3, CISSSO provided an update on the status of the pandemic in the region. As of that date, 8,453 doses of the COVID vaccine had been administered, but the vaccination campaign was on hold while awaiting new doses, expected to arrive the week of February 8.
Offloading activities (e.g. non-urgent surgeries, youth services, appointments) to accommodate the increased demands of the pandemic remains high and operations are currently reduced by about 40% across the board. Resumption will be gradual, and requires a reorganization of all services, said CISSSO. Operating rooms are now operating at 67% and they are aiming for a return to 80% activity for outpatient clinics in the coming weeks.