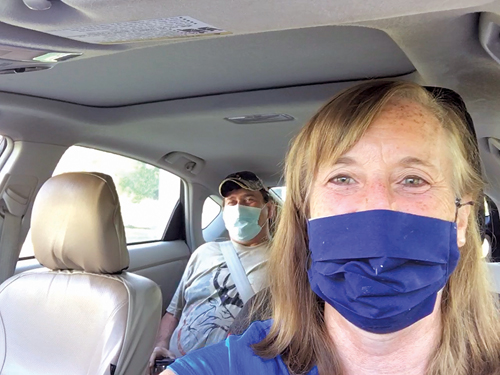 Wearing a mask on public transit is mandatory as of July 13 and will be fully enforced by July 27. Pictured is a TransporAction volunteer and client.

QUÉBEC – Over the last couple of weeks the provincial government announced further de-confinement measures. All sectors can resume activities as of June 25, except for festivals and major events, sleepover summer camps and combat sports.
On July 9, effective immediately, the government announced the province’s bars cannot sell alcohol after midnight, everyone must leave by 1 am, they must cut their capacity to half, dancing is forbidden, people must register when entering so they can be traced in the case of an outbreak, and people must be seated while consuming alcohol. The measure is in response to an incident in Montérégie where an infected person attended a crowded bar which is linked to a spike in new cases.
As of July 13, wearing masks when using public transportation is mandatory for those 12 years old and older, but the government is allowing a two-week transition period; anyone without a mask will be barred from using public transit as of July 27. Following the suit of other areas, on July 13, the government announced masks will be mandatory in all indoor public spaces in Quebec for those over 12 years old as of July 18.
According to Sylvie Bertrand, TransporAction Pontiac director general, they have already been implementing this measure for a number of weeks. When clients call to book appointments, they are informed that they must sit in the back seat and wear a mask or face covering. Clients are asked to provide their own mask, but if needed, drivers carry extras.
Hospital activities resuming
The Centre intégré de santé et des services sociaux de l’Outaouais (CISSSO) is gradually increasing “ambulatory” activities in its hospitals including surgeries, endoscopy, and medical imaging services as well as various outpatient clinics like orthopedics, physio-therapy, audiology, pediatrics, etc.
However, there are various changes: new layouts for waiting, examination and therapy rooms; adding safety corridors and dedicated elevators eliminating contact between users; increased cleaning of premises and equipment between each user; some clinic appointments are offered by phone; screening questionnaires before appointments and when entering the facilities; mandatory hand washing; and wearing a mask is strongly encouraged.
Screening open to all
As of July 2, CISSSO announced that COVID screening is now available to everyone by appointment only, and not just those who are presenting symptoms of the virus or who have been in contact with symptomatic people. “In the past, testing was only done on people who had the signs and symptoms of the virus.
The decision to test everyone is to reassure people who are concerned about their health,” said Patricia Rhéaume, CISSSO Communications Agent.
Given that some people may have very mild symptoms or none at all
and be contagious, open screening can possibly prevent outbreaks.
Screening appointments can be made by calling 1-877-644-4545.
The numbers
As of press time, there were over 56,000 cases of the virus in Québec (5,628). The Outaouais now has 620 cases (519 recovered) and 33 deaths. The Municipality of Pontiac has <5 cases while the MRC Pontiac has 0.