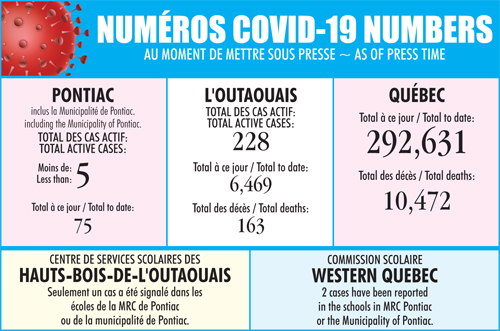 QUEBEC – Premier Francois Legault laid out the rules for the period following March break in a press conference, March 3. Montreal, Laval, Montérégie, the Laurentians and the Lanaudière region will remain in red zones due to concerns about an uptick in cases involving variants in the coming weeks while the rest of the province is in orange.
In orange zones, the 9:30 pm to 5 am curfew remains in place and private gatherings remain restricted, except under certain circumstances (ex: people living alone, or those receiving services). Beginning March 8, the 25 person limit
for religious gatherings was increased to 100 people, providing strict sanitary rules are complied with.
In-person extracurricular activities, field trips and interscholastic activities in orange zone schools will resume March 15, but only within the same class group.
Restaurants are open in orange zones, with a maximum of 2 adults per table, who may be accompanied by their minor children (reservations mandatory, attendance register kept, proof of region residency required), but bars, breweries, taverns and casinos remain closed. Gyms are open but attendees must train alone.
Mass vaccination begins
Mass vaccination of those 80 years and older has begun in the Outaouais, with appointments available starting March 11 for the Vallée-de-la-Gatineau, Pontiac, des Collines-de-l’Outaouais and Papineau territories following the
termination of vaccination in private seniors residences on February 22. Appointment booking began February 25 for those 85 and older and March 2 for those 80 and over; these can be made by visiting Québec.ca/vaccinCOVID or calling 1-877-644-4545.
The Pontiac vaccination site is at the Campbell’s Bay RA Hall, which has four stations. The site will operate five days a week, seven hours a day. Each vaccinator can vaccinate seven people per hour. An agreement has also been reached with some pharmacies to administer the vaccine. More information, including which pharmacies are participating, will be available in the coming weeks.
Family caregivers who are 70 or older and who support their loved one more than three days a week can also be vaccinated if they accompany the person to the appointment, as well as spouses who are over the age of 70.
“Appointments for [other] groups will be open soon. We will keep the
population informed as soon as possible. The Ministère de la santé et des services
sociaux will send letters to each person in the target age group as the campaign progresses to inform them of the vaccination campaign,” said the Centre intégré de santé et de services sociaux de l’Outaouais (CISSSO) in a press release.
According to CISSSO, the first day of vaccination appointment booking went well, with more than 3,250 appointments given to people 85 years of age and older and their caregiver or companion.
Pontiac MNA Andre Fortin stressed one message: “Get vaccinated! Collectively we will start to see restrictions ease”. Fortin emphasized that residents needing information, help registering or getting to appointments can contact his office.
Community groups have been tasked with providing and coordinating transportation services to vaccination sites for those who cannot make it themselves, said Fortin, and his office can put residents in contact with the appropriate services.
Fortin described the process to take place at the vaccination site: “When arriving, someone will take your info at the door, you’ll receive the vaccine and then be asked to wait 15 minutes to make sure there are no reactions. On the way out, an appointment for the second dose will be booked for no more than
90 days after, with a follow up reminder call in the weeks following.”
New vaccines approved
On February 26, Health Canada approved the Oxford University-AstraZeneca vaccine for use in Canada, making it the third to be approved in the country behind Pfizer and Moderna. The fourth, Johnson & Johnson, which requires only one dose, was approved March 5.
According to Pontiac MP William Amos, 22 million doses from AstraZeneca have been purchased; 500,000 will arrive in the coming weeks, an additional 1.5 million by mid-May, and another 20 million before September. Canada has pre-ordered 10 million doses of the Johnson & Johnson vaccine, expected to arrive before September, with options to order up to 28 million more.
Amos noted that there has been a lot of criticism about the speed vaccines are arriving in Canada. “There’s going to be turbulence and weekly deliveries will vary, but our contracts were clear. We’ll get what we ordered. It’s the finish line that counts,” he said.
Shawville schools affected
Two cases were confirmed in the Pontiac’s schools the week of February 26: one at McDowell Elementary and another at the Pontiac Continuing Education Centre, both in Shawville. The Western Quebec School Board sent letters to parents, students and staff informing them of the incidents. Those in close contact with the
individuals were advised to remain at home until March 10.