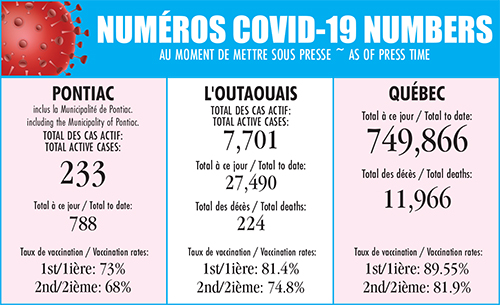 QUEBEC – With covid infections reaching all time highs,  the province announced additional restrictions for the non-vaccinated on January 6. As of January 18, vaccine passports will be required to enter liquor and cannabis stores (Société des alcools du Québec and Société québécoise du cannabis), with more non-essential businesses to be added to the list in the coming days.

Christian Dubé, Quebec’s health minister, warned that Quebec’s vaccine passport system will be expanded in the coming months to be valid for only those who have three doses, with no further details given.

Isolation shortened
Following other provinces, the Quebec  government has reduced the COVID isolation period from 10 to five days for double vaccinated people and those under 12 years old if their symptoms have improved and they haven’t had a fever for at least 24 hours. The 10-day rule still stands for the unvaccinated.
Five days after the onset of symptoms, the person can leave isolation but must wear a mask and keep a distance from others for an additional five days. If this can’t be done, the person must follow the original ten day quarantine requirement.

People who’ve had high-risk contact with someone who has tested positive (i.e., cohabitants, sexual partners and couples), must isolate for five days. They then must wear a mask for another five days and maintain a distance of two metres.

For low risk contacts, symptoms should be monitored for 10 days, but isolation isn’t required if they are double vaccinated and wear a mask.

Public health has stated a person is most contagious two days before symptoms appear and for three days after their onset.

Other restrictions
The government  had announced other restrictions on December 30, including reinstating a nightly curfew from 10 pm to 5am indefinitely.
In addition, all private gatherings are banned (with a few exceptions), restaurants are closed except for delivery and takeout, places of worship are closed (except for funerals – max 25 people), all non-essential businesses are closed on Sundays, indoor sports are suspended, and schools remain closed until January 17 (with online learning). Daycares are open for essential workers only.

On January 5, Education Minister Jean-François Roberge said there are no plans to delay the reopening of schools any further, but it depends on how the pandemic unfolds. In addition, Quebec will distribute 7 million rapid tests to students and staff; half the week they return and the rest in February.

A minimum of three months is required between second and third doses. Appointments can be made via the ClicSante website or by calling 1-877-644-4545.

Some infected health workers remain on the job On December 28, Dubé announced some health workers who’ve tested positive for COVID or have come in close contact with a confirmed case can remain on the job due to a number of COVID-related absences, a policy they extended to other essential sectors such as public security, public transit, and food processing.

Decisions will be made on a case-by-case basis, but the province created guidelines to help managers decide which employees can remain on the job and which ones must isolate. Ex: someone with few or no symptoms or who has come in contact with a confirmed case could be assigned to work in a COVID unit.

Testing for priority only  Since January 4, PCR tests (in-clinic testing) are now reserved for high risk people only, due to high demand and test supply shortages: health workers in contact with patients; the homeless; Indigenous communities; those in active outbreak environments; and all residents, employees and caregivers who enter prisons, hospitals, group homes, or shelters.

The rest of the population can use rapid tests at home. If one isn’t available and a person has symptoms, it’s suggested they quarantine in the same manner as if they had received a positive test.

In addition, the Centre intégré de santé et des services sociaux de l’Outaouais is no longer offering walk-in services at screening centers. “The suspension is due to the high volume we are currently experiencing and to facilitate operations and fluidity. We ask people to make an appointment for screening. More time slots will be added with the closure of the walk-in mode,” said the organization in a public notice.

Appointments can be made by visiting https://cv19quebec.ca/ or calling 1-877 644-4545.
*For updates amid this rapidly unfolding situation, please listen to local radio CHIP FM or visit the www.quebec.ca/corona virus website.