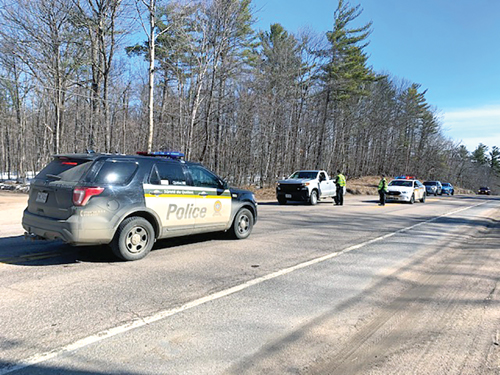 OUTAOUAIS – On April 1, the province announced the Outaouais would be locked down to prevent the spread of Covid-19, given that it has considerably fewer
cases than other regions of Québec. As of noon that day, rotating police check points were established in strategic locations across the region, both between Quebec and Ontario and MRCs, with the Sûreté du Québec working closely with Gatineau police and public security.
“The measures do not apply to activities to obtain or provide healthcare or those that provide humanitarian support and essential services for the continuity of the supply chain in all regions of Québec,” says the government’s press release. Essential work travel and to exercise shared child custody agreements is also permitted.
“There will be a certain tolerance for residents to access a grocery store or pharmacy alot closer to their homes (ex: Quyon residents going to Shawville or L’Isle-aux-Allumettes residents going to Pembroke),” said Pontiac MNA Andre Fortin.
The Conférence des Préfets de l’Outaouais (CPO), which advocated for the measure, held a press conference shortly after the announcement. “This was a necessary step given our geographical reality. Every trip potentially involves stops that multiply the risks. Law enforcement now has a greater capacity to limit
non-essential travel,” said Maxime Pedneaud-Jobin, Mayor of the City of Gatineau.
Jane Toller, MRC Pontiac warden, said it’s an important step to protect the Pontiac, which is now in a better position to fight the virus. “It’s the time to shop local. Every time someone leaves, it’s an opportunity for exposure and the Pontiac
is especially vulnerable because of our overall poor health and large senior
population,” she said.
“Today, reality has really hit. Up until now, some have seen this as sort of an imaginary virus that’s happening elsewhere but not here. What’s happening in the U.S. right now could happen here. There’s no place to hide from this. In a crisis like this, I’m open-minded to anything that can save lives,” she stated.
However, even though L’Isle-aux-Allumettes agrees with having police checks, they are opposed to closing the border completely. The municipality convened by teleconference on March 31 and passed a resolution highlighting their interconnectedness with Renfrew County, citing the need for access to essential services like groceries, banking etc. and for the thousands of residents in both provinces who work in the adjacent communities.
Mayor Winston Sunstrum said the MRC Pontiac’s mayors were not consulted prior to the warden’s public comments on March 27 supporting a potential closure, and he clarified that the warden is not mandated to make decisions for the MRC Pontiac – rather the mayors are the deciding body. “It should have been discussed at the mayor’s table before going public,” he said.
The current situation
The region’s health authority, CISSSO, continues to give regular updates on the Coronavirus situation; numbers change daily.
With the infection now affecting healthcare professionals, CISSSO assures the pubic that all cases are traced and anyone having contact is also placed in isolation.
A special Covid-19 unit was opened at the Hull Hospital, April 1, capable of admitting 20 infected patients in negative pressure rooms, with the capacity expected to expand. CISSSO has also set up “safe accommodations” for mothers in obstetrics and maternity units with secure service corridors to isolate them from other patients.
As of press time, there were over 8,500 confirmed cases of the virus in quebec (121 deaths), and over 15,500 nationwide. The Outaouais now has 117 confirmed cases