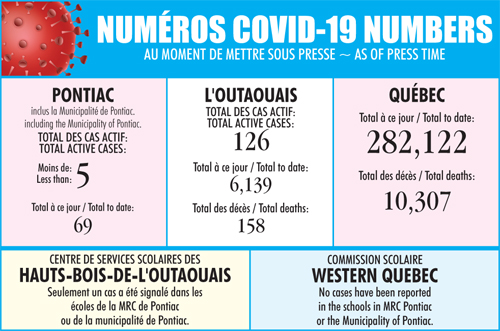 QUÉBEC – On February 16, Québec Premier Francois Legault laid out the measures and restrictions for the next few weeks with March break looming for students, which included downgrading the Outaouais to an orange zone as of February 22.
Across the province, theatres and concert halls could reopen as of February 26 (max 250 people, social distancing and mask wearing mandatory); groups are allowed to participate in outdoor activities in public places together, providing there are no more than eight people from different addresses; indoor sports (pools, arenas) will be partially allowed as long as activities are practiced individually or within family bubbles; and private gatherings continue to be prohibited (except for people living alone and those receiving services).
In orange zones, the curfew runs from 9:30 p.m. until 5:00 a.m. To comply with the 9:30 p.m. curfew, all commercial enterprises, except for drug stores and service stations, must close by 9 p.m. Places of worship are open (max 25 people), and restaurants can reopen (maximum two adults per table, as well as their minor children, mandatory registry, proof of local residency).
Although the province originally hinted that it was considering imposing road blocks between Québec and Ontario as well as between regions during March break to prevent non-essential travel, it decided to increase police interventions to ensure the curfews and family bubble restrictions are followed. Renting a chalet or hotel room in another region is permitted, provided the curfew and family bubble restrictions are respected.
Legault urged employers to allow employees to take time off during March break to reduce cases where grandparents, a vulnerable group, are babysitting children.
Outaouais vaccine sites unveiled
On February 11, the Centre intégré de santé et de services sociaux
de l’Outaouais (CISSSO) announced the locations of the region’s six vaccination sites.
Mass vaccination sites, open seven days a week and 12 hours per day, will
be located at the Palais des Congrès de Gatineau (42 stations), Buckingham Community Centre (12 stations) and the Wakefield Community Centre (12 stations). When these sites are fully operational, 10 people can be vaccinated per hour, per vaccinator.
Other sites will be located at the Whissell Sports Complex in St-André-Avellin (four stations), Centre Multi fonctionnel de Maniwaki (four stations) and Campbell’s Bay Recreational Center (four stations). These sites will operate five days a week, seven hours a day. Seven people can be vaccinated per hour, per vaccinator when the sites are fully operational.
Marie-Pier Després, CISSSO communications agent, said there is not an official start date for general public vaccination, but that it will be “soon.” It will depend on the amount of vaccines received over the next few weeks as CISSSO must first complete vaccinations in private seniors’ residences, and in isolated and remote communities. CISSSO estimates that between 3,000 and 6,000 people can be vaccinated per day.
Although COVID vaccine shipments slowed down during previous weeks as Pfizer temporarily cut output to expand its Belgium facility, deliveries have resumed. According to Pontiac MP William Amos, Canada expected 475,000 doses of the Pfizer vaccine the week of February 22, and 4 million by the end of March. Moderna was expected to send 168,000 doses the week of February 22.
Education
On February 10, Jean-François Roberge, Québec’s Minister of Education, released the revised term weightings for the 2020-2021 school year in order to support students experiencing challenges. This measure follows the Ministry’s
previous decision to cancel all provincial exams.
Term one will now count as 35% of the final year-end result for students at both the elementary and secondary level, while the second term will count for 65%.