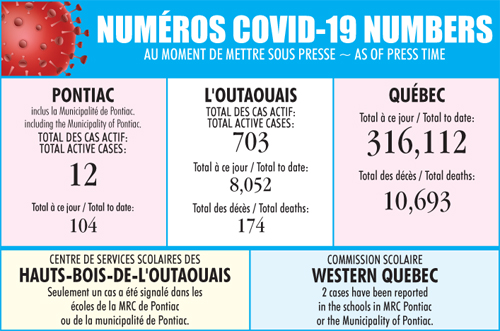 Allyson Beauregard
OUTAOUAIS – Québec has entered the third wave of the pandemic says government officials in light of an upward trend in daily cases. On March 31, Québec Premier François Legault announced the Outaouais as well as Québec City, Chaudière-Appalaches and Bas St-Laurent would return to the red zone as of April 1 at 8 p.m. due to “exponential increases” in their daily cases.
Three areas – Gatineau (including MRC-des-Collines), Levis, and Québec City – were put under a 10-day lockdown until April 12, similar to the one imposed at Christmas: all non-essential businesses and schools are closed (with distance education); curfew reverted to 8 p.m. instead of 9:30 p.m.; teleworking mandatory; restaurants are limited to takeout or delivery and places of worship to a maximum of 25 people. “I can’t exclude other regions from being added in the coming days,” said Legault.
In red zones, restaurants are limited to delivery and takeout, students attend school full-time, the curfew is in effect from 9:30 p.m. until 5 a.m., places of worship are capped at 250 people (25 for weddings and funerals), bars and casinos are closed, and group activities are allowed in outdoor public places with no more than eight individuals from more than one household.
Private gatherings are forbidden in orange and red zones. Police operations were ramped up over the Easter weekend, with gatherings the main focus. More vaccines will be sent to regions experiencing the largest increases in cases.
—- Mass vaccination
The Centre intégré de santé et de services sociaux de l’Outaouais (CISSSO) opened up vaccination to Outaouais residents who are 60 years and older (born 1961 or earlier) on April 6. Residents can book appointments online at Québec.ca/vaccinCOVID. For those who do not have access to the Internet or have difficulty using it, it’s possible to call 1-877-644-4545 for support.
— Special vaccination in Rapides
A mobile vaccination team was deployed to Rapides-des-Joachims on April 1 to vaccinate anyone over 18 who wanted to be vaccinated. “Considering its geographical location and that we can only access it through Ontario, travel is not recommended for this area. Like other isolated communities, we vaccinate the entire community on a priority basis,” said Camille Brochu-Lafrance, CISSSO communications agent. Staff called all residents to notify them of the special clinic and to arrange appointments.
— AstraZeneca suspended
On March 29, Québec followed suit with other provinces and suspended the use of the AstraZeneca vaccine in people under 55 as a precaution based on recommendations from national health advisory boards. The European Medicines Agency is examining a possible link between the vaccine, blood clotting in the brain and other bleeding disorders based on rare reports of the conditions in some European countries, mostly in women under 55. To date, there have been no reports in Canada.
“Health Canada (HC) will be issuing additional terms and conditions on the authorizations of [this vaccine]. These will require that the manufacturers conduct a detailed assessment of the benefits and risks of the vaccine by age and sex in the Canadian context. This information will support the ongoing evaluation of these rare blood clotting events, and allow HC to determine if there are specific groups of people who may be at higher risk,” said HC in a statement.
Despite the setback, Québec officials are still aiming to administer a first dose to every resident who wants one by June 24.
— Testing delays
Due to a high demand for screening, CISSSO is experiencing a three or four day delay in receiving COVID results.
“The lab is running at full capacity, but because demand exceeds it, we need an extra day or two to provide the results. Our usual turnaround time is around 48 hours,” said Marie-Pier Després, CISSSO communications agent.
To address the problem, additional staff are being hired for the lab, which operates 24/7, and some tests are sent to a private lab to speed up turnaround times.
— Masks recalled
On March 27, the provincial government recalled SNN200642 (grey-blue) masks following a warning from HC that they and could contain a potential toxic material and be dangerous to the lungs. According to media reports, HC determined the masks could cause early lung damage through inhaling microscopic graphene particles used in the fabrication. These masks were commonly distributed to schools and daycares across the province.
Both the Centre de services scolaire des Hauts-Bois-de-l’Outaouais and Western Quebec School Board issued notices that they would stop using the masks immediately. They are asking students and staff to return any masks to their schools for disposal.
—- Avoid ERs if possible says CISSSO
With a high volume of people visiting the region’s emergency rooms, CISSSO is asking residents to avoid ERs if possible and to turn to other resources instead: Info-Santé at 811, appointments with family doctors, visit a medical clinic with or without an appointment, consult a pharmacist, visit CLSCs, etc.
“However, if a person has an urgent health problem, do not hesitate to go to the emergency room,” CISSSO emphasized.
—- Feds fund Canada vaccine facility
On April 1, the federal government announced an investment of up to $415 million to support Sanofi Pasteur Limited in building an influenza vaccine manufacturing facility in Toronto. The facility will ensure drug product formulation, production and inspection. Sanofi will invest more than $455 million as well as create 1,225 jobs. Ontario will invest $55 million, making it a $925 million project. Sanofi will also invest at least $79 million a year to fund Canadian research and development.