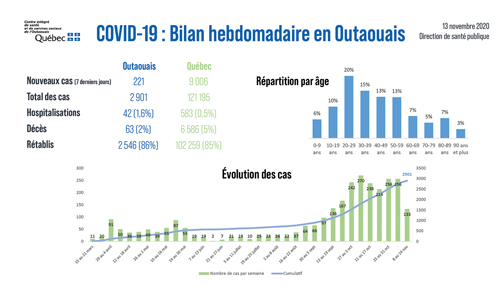 QUÉBEC – Québec continues to reach daily highs for new COVID infections. Premier Francois Legault announced that gyms, museums, concert halls
and restaurants in the province’s red zones will remain closed because of the increased “opportunities of transmission.”
On October 26, Legault extended the month-long restrictions in the province’s COVID red zones until November 23. He said he would review the
situation in two weeks and consider relaxing some of the rules if there was a
consistent decline in new cases and hospitalizations. However, all measures will remain in place for at least another two weeks, he announced during a press conference on November 10.
However, Legault is considering allowing two people from different addresses to meet. Currently in red zones, no visits are allowed with the exception of a single visitor from another address for people who live alone, informal caregivers, individuals offering services or support, or labour for planned work.
Part of the Outaouais – Ville de Gatineau and MRC Les Collines-de-l’Outaouais (including the Municipality of Pontiac) – remain in the red zone, while the MRC Pontiac is in the orange.
School closures considered
During a press briefing on November 12, Legault said schools may have to be closed this winter to gain control of the pandemic. This could mean starting the Christmas
holidays earlier than planned or extended them longer for a predetermined amount of time and making up for lost time during the summer.
According to Legault, schools and workplaces have the highest rates of transmission; about 1,200 classes had already temporarily closed due to COVID. He stressed that no decision has been made, discussions continue and the measure will be used as a last resort.
Major deficit
Eric Girard, Quebec’s Minister of Finance, provided a budget update on November 12 which predicts a $15 billion deficit for 2020-2021, followed by $8.3 billion in 2021-2022 and $7 billion in 2022-2023. The pandemic is blamed for generating the deficits. “We will return to a balanced budget within 5 years without cutting services or raising taxes. Additional details on the way forward will be presented in the next budget,” said Girard.
Hospital system overload
With COVID hospitalizations increasing, the Centre intégré de santé et de services sociaux de l’Outaouais (CISSSO) has imposed a ministerial order on nurses, nursing assistants and préposes in the Hull and Gatineau hospitals requiring part-time employees to work full time. Employees may also be required to move units or hospitals based on need. The hospitals have also reduced certain services (read more page 7) and the designated COVID unit at the Hull Hospital will be expanded to more than 80 beds over four different units.
Enhanced mental health services
CISSSO has enhanced its mental health services due to an increase in need, using government investments. “Since the beginning of the first wave, we’ve noted a resurgence of requests for mental health services. Among other things, there are more calls to Info-Social (811 option 2),” said the organization in a press release.
The changes include: enhancement of the Info-Social team structure (811), increasing the services of community groups, increased support and clinical supervision for professionals, quicker access to multiple disciplines for frequent service users, creating a mobile team that allows for quick interventions for adult clientele, intensive intervention team set up for youth clientele, and developing a group for parents of anxious children.
People experiencing psychological distress are invited to contact 811, option 2 to receive help.
Vaccine progress
Pfizer and its German partner BioNTech recently announced that early data shows their vaccine is showing a 90% success rate at preventing COVID infections and no serious side-effects have been reported. The vaccine is one of several that Canada has preordered should it become available on the market, and one of at
least ten in the late stages of testing around the world. Pfizer’s vaccine is administered as two doses, 28 days apart.
Pfizer expects it will be able to file an emergency use application with U.S. regulators later this month. However, further testing is required and no vaccine is expected to be available
for widespread use before the end of the year. Initial supplies will be rationed.
Prime Minister Justin Trudeau said the results are encouraging. Québec Premier Legault said it’s good news, but the fight is far from over and residents will have to continue living with the virus for at least another few months.
Elderly most affected
Since September, CISSSO has witnessed an increase in the proportion of cases among those who are 60 years and older. People between 60 and 79 years old represented 7% of the cases in September, 11% in October and 17% since the beginning of November. Those 80 and older made up 3% of cases in September, but jumped to 19% in November. “This tendency is alarming, as these are the age groups most at risk of complications or mortality due to COVID-19,” said Dr. Brigitte Pinard, Outaouais public health director.
Nationwide, those between 20 and 29 years old are the group most affected, accounting for about 19% of the confirmed cases.
The numbers
As of press time, the Centre de services scolaire des Hauts-Bois-de-l’Outaouais had 13 cases within their schools, while the Western Quebec School Board had 28. None of the cases in the schools are in the MRC Pontiac or Municipality of Pontiac.
There were over 124,000 cases of the virus in Québec (6,626 deaths). The Outaouais had 3,004 cases (2,596 recovered) and 64deaths. The Pontiac (including the Muncipality of Pontiac) had 35 cases.