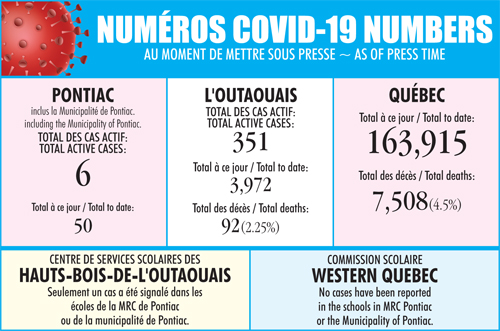 QUÉBEC – On December 3, Québec Premier Francois Legault announced that Christmas gatherings are no longer permitted in the region’s red zones as daily COVID cases reach all-time highs. The province is also set to begin administering the first doses of Pfizer’s COVID vaccine the week of December 14.
“The whole plan for the holidays announced earlier is essentially being tossed to the curb and we are now asked to follow the rules in place for gatherings in each alert zone,” said Pontiac MNA André Fortin. In late November, Legault had said Christmas gatherings of up to ten people would be allowed across the province between December 24 and 27, providing residents agreed to a “moral contract” and self-isolated for a week before and after.
Those living outside of the red zones are allowed to have gatherings, but a maximum of ten people are allowed in yellow zones and a maximum of six in orange zones. Those who live in red zones are forbidden to travel to other regions for gatherings and could face fines if they are caught, but those who live alone are allowed one visitor. The extended school breaks will be maintained as planned.
Part of the Outaouais remains in the red zone: Ville de Gatineau and MRC des Collines-de-l’Outaouais (including the Municipality of Pontiac), while the MRC Pontiac is in the orange.
Michel Gervais, a La Pêche councillor, has launched an online petition lobbying Public Health to change the red zone status of the MRC-des-Collines. Over 2,200 people have signed. The petition argues new infection counts in the region are comparable to other MRCs that are in the orange zone and maintaining a red zone is detrimental to the economic and social well-being of communities.
Joanne Labadie, mayor of the Municipality of Pontiac, doesn’t support the petition given the rising COVID numbers. “Public Health made it clear that
a single super spreader case could have serious consequences for our regional health care system; cancelling surgeries, elective services and more. [For the most part] businesses in our region are doing well. I fail to see how the intended results of this petition could help our community,” she said.
Vaccine rolls out
On December 7, the federal government announced COVID vaccinations would begin as early as December 14 with the arrival of Pfizer’s vaccine. Québec expected to receive about 4,000 doses, enough to vaccinate 2,000 people (two doses required per person) on December 14. These will be sent to
long-term care residences (CHSLDs) in the Québec City and Montreal areas.
Between December 21 and January 4, the province expects to receive 57,000 doses to vaccinate between 22,000 and 28,000 people. In the first quarter of 2021, Québec anticipates receiving 1.3 million doses from two fabricators – Pfizer and Moderna – to distribute to about 650,000 people.
Twenty vaccination sites – at least one for each region in Québec – have been
identified. Residents of CHSLDs will be vaccinated first, followed by health care workers, residents of private seniors’ residences, people living in isolated communities and then age groups in descending order.
New retail restrictions
New restrictions for retail stores began December 4 with strict rules on the
maximum number of clients permitted in businesses, which depends on their
size; there must be clear signage stating the limits. As a result, some stores are
limiting customers to one person per household. Masks and physical distancing must be enforced and increased police inspections will be performed.
November summary
The Centre intégré de santé et des services sociaux de l’Outaouais provided an overview of the situation in the Outaouais in November at a press conference on December 1. Although the number of confirmed cases had reduced compared to the week prior, the number of close contacts increased.
“To be considered a close contact with a person with COVID, you must have been within 2 metres for at least 15 minutes, cumulative or not, with that person.
487 close contacts were reported in the last week of November. Of these, approximately 40% were avoidable, i.e. contacts such as friends, a visit to a mother, contacts at work, etc.,” said CISSSO’s report.
November witnessed a total comparable to October; 1,072 cases versus 1,086 in October.
“However, there was a significant increase in November in the number of cases associated with outbreaks in care and residential settings. There was also an increase in hospitalizations compared to October. We are also seeing an increase in the number of people aged 70 years and older who are the most vulnerable population,” concluded the report.