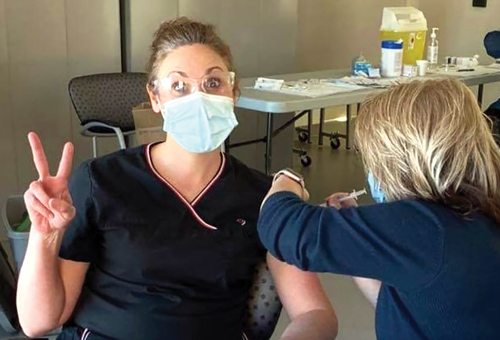 Serena Lariviere, an employee of the Pontiac Reception Center (CAP) in Shawville, was one of the employees who were vaccinated on January 8. CAP residents were also vaccinated the same day as well as other seniors’ residences across the Pontiac.

QUÉBEC – On January 6, with Queébec reaching record daily case numbers, Premier Francois Legault announced a “schock therapy” to get Covid
infections under control: a four-week, province-wide lockdown including nightly curfews.
All of Québec, except the Cree Territory of James Bay and Nunavik, are on Maximum Alert (red zone) until February 8. Curfews began January 9: everyone must remain in their homes between 8 pm and 5 am, with exceptions for essential work, healthcare and humanitarian reasons. Rule breakers face fines between $1,000 and $6,000.
Like the holiday lockdown, only essential businesses like grocery stores, dentists and other health specialitsts, gas stations and pharmacies remain open, but they can only sell essential goods and services. Curb-side pick-up is allowed for
non-essential businesses. Bars, restaurants (except for takeout or delivery), salons, spas, theatres, museums, and casinos are closed.
To comply with the 8 pm curfew, businesses must close no later than 7:30 pm, but drugstores and service stations follow their normal schedules.
Elementary schools reopened on schedule January 11, but virtual learning was extended until January 18 for high schools. In elementary schools, all students except preschoolers must wear a mask in common areas, and grade 5 and 6 students must also wear them in the classroom. In high school, the government will now supply each student with two procedural masks per day.
Daycares remain open at 100% occupancy. Attendance is optional and children will not lose their places, but parents must pay regardless. Drop-in daycares are closed.
No private gatherings or home visits are allowed, except for caregivers, people offering service, support and/or labour for work already planned, and people living alone who can receive only one visitor.
Public gatherings are also not permitted, except for funerals which are
limited to a maximum of ten people.
Travel from or to a red zone is not recommended.
Sports and recreational activities (e.g. walking, skiing) are limited to family bubbles. Indoor sports are prohibited until February 8, except for school gym classes, identified athletes in training, and professional sports that have permission from public health.
The MRC Pontiac, Papineau and Vallée-de-la-Gatineau ‘went red’ on December 17, although the Municipality of Pontiac (MRC-des-Collines) and Gatineau were put in the red zone on October 10.
Vaccination
The Centre intégré de santé et des services sociaux de l’Outaouais (CISSSO) received its first doses of Pfizer’s COVID vaccine on December 21. Vaccination began that morning at the CHSLD Lionel-Émond in Gatineau.
Moderna’s vaccine arrived in the Outaouais on January 6 and 500 doses were administered that day. Vaccinations at the Pontiac’s CHSLDs and
the Pontiac Community Hospital’s long-term care unit began January 8.
According to CISSSO, about 75% of the Outaouais’ COVID deaths have occurred among people living in CHSLDs, private senior’s residences and intermediate resources.
Vaccines will be available gradually and CISSSO has released a list of the order vaccines will be distributed starting with residents of residential and long-term care centers or intermediate and family-type resources; then health and social
service workers; isolated and remote communities; those 80 and older; people between 70 and 79; those between 60 and 69; adults under 60 who have a chronic disease or condition; adults under 60 with no health problems, but who provide essential services; and then the rest of the adult population.
To vaccinate as many people as quickly as possible, the province changed its vaccination strategy in early January. Previously, since the vaccine requires two doses, half were held in storage. “It’s recommended that a first dose be offered to as many people as possible in the first six priority groups. When these groups have received the first dose and if efficacy studies show a decline in protection after the first dose, second-dose vaccination will then be undertaken,” said CISSSO in a press release. This means the 21 and 28 day spans the vaccine companies recommend between doses will not be respected in a lot of cases.
According to health officials, the first dose provides most of the protection against the virus while the second promotes prolonged immunity.
Education measures
On January 8, Quebec Minister of Education Jean-Francois Roberge explained new measures that will be taken with the pandemic evolving. Free tutoring will be available to students who need help using a bank of volunteer or retired staff,
and college or university students; parents will be able to enroll by the end of the month.
Report cards will be delayed from January 22 to February 5, and it will be given less weight than the second in determining overall grades.
Provincial exams for both elementary and secondary schools will be cancelled
and educators will receive a document explaining essential knowledge to be taught this school year.
CISSSO offloads services
The week of December 20-26 was the worst CISSSO has seen yet. “We are offloading our activities as much as possible to support outbreak environments and anticipated increases in COVID hospitalizations. We are only carrying out urgent or semi-urgent activities,” said Marie-Pier Després, CISSSO media relations agent.
Money for travellers?
The federal government plans to close a loophole in the Canada Recovery Sickness Benefit (CRSB) that allows people returning from vacations out of the country, despite advisories against travelling, to claim $1,000 for their mandatory 14-day quarantine upon return home.
Speaking on January 5, Prime Minister Justin Trudeau said anyone thinking of vacationing abroad should not, and that if they choose to, the government will not cover their mandatory quarantine. He said more details on closing the loophole will be available soon.
The CRSB is meant to allow Canadians without sick-leave benefits from work to afford to stay home if they have to quarantine due to contact with a positive COVID case or if they are personally experiencing symptoms.