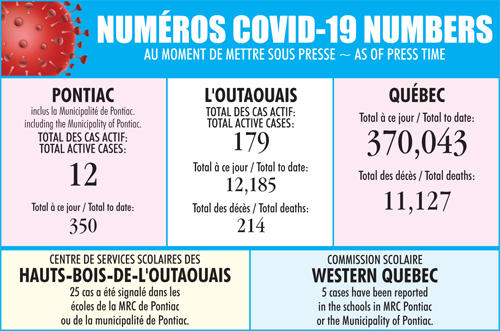 QUÉBEC – On May 18, Quebec Premier François Legault revealed a ‘de-
confinement’ plan for the province this summer and fall.
The goal was for most regions to move to orange zone on May 31 (secondary students in class full-time, restaurants re-open, 100 people in places of worship) to the yellow zone on June 14 (two households can gather, supervised outdoor sports and recreation will be allowed in groups of 25 people, bars reopen) and to green on June 28 (maximum 10 people from three residences for private gatherings indoors, all indoor team sports allowed). As planned, the Outaouais and seven other regions became orange zones on May 31.
Starting May 28 in most regions of the province (including Outaouais): the curfew was lifted, outdoor gatherings (maximum eight people from different residences or occupants of two residences with distancing) were permitted, large indoor venues and outdoor stadiums with pre-assigned seating were allowed 250 people per section, for a maximum of 2,500, and travel bans were lifted between regions.
By June 25, day and sleep-over vacation camps will open, those with two doses of the vaccine will not have to wear masks or distance themselves at private gatherings, and outdoor public events like festivals will be allowed with specific rules (depending on the colour zone regions are in).
The province is hoping that around the end of August, if the epidemiological situation allows it and 75% of those 12 years and older are vaccinated, there will be reduced requirements for masks and distancing in many public spaces or at events for those who have received two doses of the vaccine. It is also hoped that colour levels will end, CEGEPs and universities will reopen for in-person learning, there will be increased person limits for indoor venues and outdoor events, as well as additional relief for gatherings, sports and recreation.
Vaccination
With a high volume of vaccines set to arrive and vaccination rates exceeding initial expectations, the government is making changes to the ClicSanté appointment booking website allowing Quebecers to rebook their second doses earlier.
The government announced on May 27 that the span for the AstraZeneca vaccine will be reduced to eight weeks and those who received the shot before April 3 could get their second dose as of that weekend through a number of walk in clinics, including one at the Campbell’s Bay RA Hall. For people 45 years and older who received AstraZeneca as the first dose, the same vaccine remains recommended for the second dose.
The government said authorities need a bit more time to finalize the plan for all other Quebecers, but that those who received the Pfizer or Moderna
vaccines should be able to start booking earlier second-dose appointments as of June 7.
The goal is to fully vaccinate all those who want a second shot by August 31.
Starting May 25, youth aged 12 to 17 were able to book an appointment to be vaccinated. In addition, as of June 7, vaccination for this group will begin in schools and continue throughout the summer to reach adolescents who were missed. Students who turn 12 during the summer will be able to get the vaccine before classes start in the fall.
The second dose will be given when school resumes in the fall of
2021, or before then if possible. More details will be announced over the summer.
Youth 13 and under must have consent, so students will be provided with forms for parents or guardians to sign. Those 14 and older can give their own consent.
So far, Health Canada has only approved the Pfizer vaccine for this age group.