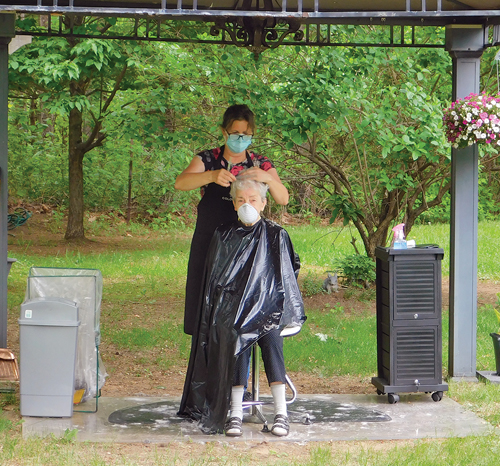 Hair salons opened on June 1with guidelines. Janet Fleury of Coiffure Modern Hair Styling in Chichester set up a mobile salon outside under a canopy. Customers and Fleury wear a mask, which she changes between customers. “The arrangement works well and customers get to enjoy nature, listening to the birds, looking at the flowers and watching the horses romp in the adjacent paddock,” said Fleury.

QUÉBEC – On June 8, the government announced Québec restaurants could reopen on June 15, while those in the Greater Montreal area, Joliette and L’Épiphanie will follow on June 22.
However, strict hygiene and social distancing regulations from CNESST (Commission for standards, equity, health and safety at work) and public health authorities must be followed. The government is deploying 1,000 prevention agents and 450 CNESST representatives throughout the province to provide entrepreneurs with information and answer questions, either by phone or on site visits.
Indoor dining rooms and patios are limited to food services and customers must remain at least two metres apart, except those from the same residence. Health officials recommend that menus be displayed on screens or boards rather than exchanged, and staff must wear masks and eye protection if a 2m distance isn’t possible. Tables and chairs are disinfected between clients and anything touched by many people like counters and doorknobs cleaned often. Buffets must have staff
serving food. Owners will determine how many people can be seated inside and
outside depending on the space available.
While most restaurants owners are excited to re-open for dine-ins, the transition won’t be easy. “This is new to a lot of people. You have to always be thinking of where your hands have been and where they are going. A lot of thinking before action is required,” said Elsa Renwick, co-owner of The Junction in Campbell’s Bay, noting eye coverings for servers and cooks may be difficult.
Aside from logistical challenges, strict cleanliness and social distancing measures inevitably affect businesses’ bottom line. “We may have to increase staffing to eliminate cross-job contamination. We have to buy hand sanitizer dispensers as well as personal protective equipment like gloves that are hard to come by and have increased in price. Providing take-out is also an added expense because original menu costs didn’t accommodate for bags, multiple containers, dressings and sauces, cutlery, napkins, etc.,” continued Renwick.
Magnum Outfitters in Davidson also think they may need to hire more staff because of the cleaning required between customers. “We are going to start with our current staff and our first weekend in business should tell us where we have to go from there”, said co-owner Gaetane Denault.
As a restaurant and outfitting business, Denault said they were hit twice – the restaurant had reduced business and with the US border closed, it eliminated most of their outfitter customers – and there wasn’t enough help given from the government. “We can borrow money, but it has to be repaid. There’s talk of a
second wave, so businesses may not want to take loans [when the future is uncertain],” she added.
Some restaurants, like Waltham Station and Rumours Resto-Café in Otter Lake, have decided to continue only offering take-out and delivery to protect their health. “How restaurants will survive at half capacity and manage the strict measures, I don’t know. We’ve been lucky to easily convert to takeout, but not everyone could. The future is just as uncertain as it was a couple months ago,” Cobe Rabb, Waltham Station owner, told the Journal.
“We’re a very small family-run business, so if we get sick, we’d have to close.” said Rumours in a social media post.
Indoor gatherings permitted
The government also announced that Quebecers can now hold indoor gatherings of less than 10 people from three different households as of June 15 for most of Québec and June 22 for the Montreal area. All health recommendations must be followed: 2 metre distance, buffet-style meals avoided, at-risk individuals shouldn’t participate, and commonly touched
items washed frequently. Homeowners should keep a list of who has been to their residence to make contact tracking easier in the case of an outbreak.
Similarly, up to 10 people from three different households can now be together to rent cottages, lodges, campgrounds, etc. together as long as a 2 meter distance is maintained between members of different households. This is effective the same dates as the indoor gatherings.
As of June 22, Quebec is allowing indoor public gatherings of up to 50
people, provided social distancing rules are respected. In places with seating, like movie theatres, people will be expected to keep a 1.5 metre distance, but the 2 meter rule still applies to other situations. Children under 16 will be able to reduce physical distance to one meter instead of two.
Tourism opening expanded
On June 11, the province announced new tourism operations are permitted to open. Zoos, botanical gardens, agri-tourism farms, tourism reception and information centres and artisanal processors can open June 19, and water excursions can resume July 1.
The government has introduced a series of measures evaluated at around $750 million over two years to help the tourism industry: $446 million for the Programme d’action concertée temporaire (PACTE) for business loans; $200 million will be added to the Programme d’appui au développement des attraits touristiques (PADAT) to encourage hotel renovations and upgrades; a
$13.8 million subsidy for accommodation businesses, equivalent to the tax on accommodations they paid for the first quarter of 2020; and $20 million to encourage Quebecers to travel within Quebec (rebates for certain vacations, SEPAQ network cards, and the creation of an Attractions Passport with various discounts based on the number of attractions visited).
Préposé (orderly) program
To alleviate staff shortages in long-term care centres, the government launched a new compressed training program for orderlies with the goal of having 10,000 new employees ready to enter Québec’s workforce by September. More than 55,000 applications were completed online by June 3, the day after the program was launched, and the deadline was June 5. During the week of June 8, eligible candidates were interviewed and those selected began training June 15.
Students are paid $21 per hour while completing training and once hired will earn $26 an hour, or about $49,000annually.Graduates wanting to work in other places like hospitals or home-care are required to go back to school to do
further training.