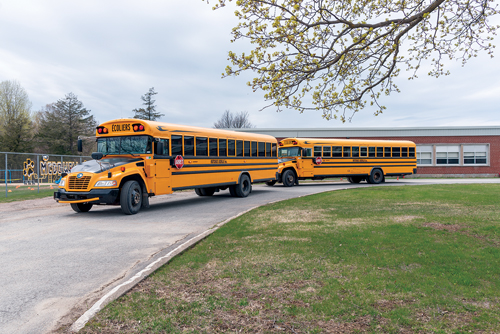 Schools reopened in the Outaouais on May 11, marking the first time buses have been on the road in the province since March 13.

OUTAOUAIS – The Outaouais’ elementary schools and daycares were back in session on May 11, two weeks after Québec Premier Francois Legault announced they would reopen. Some businesses (retail with outside entrances, manufacturing, construction, factories, etc.) have been gradually reopening since May 4 and border controls were lifted May 11 in the Outaouais outside of Gatineau. Daycares will increase their occupancy gradually until mid-June.
Overall, the Commission Scolaire des Hauts-Bois-de-l’Outaouais (CSHBO) witnessed a 32% average return rate in their schools, but for the Petits-Ponts establishments in the Pontiac, only 25% of students returned. The numbers were a lot lower for the Western Quebec School Board (WQSB) which had a 15% re-enrollment rate across the board. Of the 539 students in the WQSB’s four elementary schools in the MRC Pontiac and Municipality of Pontiac, only 63 students (12%) were expected to return, with only one at Onslow, in Quyon. However, actual numbers decreased when school began and again during the first week back.
For example, St. John’s Elementary in Campbell’s Bay was supposed to have 11 students returning, but only three showed up on opening day and none the following day. McDowell Elementary in Shawville was supposed to have 43 students, but only about 20 attended on May 12.
Schools have to abide by several requirements to be in compliance with provincial health requirements: desks spaced at least 6 feet apart, unnecessary furniture removed from classrooms, no access to the building for people other than students and staff, regular and frequent hand washing, staggered recesses to limit interaction, and no use of cafeterias. School buses were limited to twelve students and drivers are protected by plastic sheeting given that 60% of drivers are over age 60. Lockers can’t be used and students must place their belongings in bins or bags at their desks.
“We didn’t know what to expect when we went back and it’s not an easy situation for anyone. It’s a different environment we walked into, but so far it has been a positive experience,” said Gaston Allard who teaches grade three at Poupore in Fort-Coulonge.
Following government directives, Allard said teachers are reviewing material they’ve already taught, making sure students fully comprehend it. “There’s a different vibe because there’s not as many kids, but it’s not more stressful,” he said.
WQSB holds virtual meeting
The WQSB held a virtual meeting, May 7, to discuss the impending reopening of their schools with over 100 people attending. Commissioners who participated in the meeting called the preparation effort “colossal”, given the nine working days’ notice schools were given to re-open. Mike Dubeau, WQSB director general, detailed the schools’ preparedness, including the planned PD Day on May 11 to review social distancing practices with staff. In some schools, entry was progressive over two days. Dubeau said that while the province capped class sizes at 15 students, the WQSB was using 10 as its maximum, although the average class size is five students.
Over 230 staff members applied for an exemption from returning to the workplace, with reasons ranging from personal health concerns to living with seniors or vulnerable family members.
Staff working from home could tele-teach, but this mode of instruction is still under development said Dubeau.
Normand Young, a commissioner from the northern part of the board, spoke about the lack of reliable internet service in his sector and the effect on tele-teaching. He asked the commissioners for help to push the federal and provincial governments on the matter. A resolution on the subject was tabled for further discussion at the board’s next meeting.
Funds for seniors
On May 12, the federal government announced it will invest $2.5 billion to provide extra support to seniors during the COVID pandemic, an amount critics say isn’t enough. Seniors eligible for Old Age Security (OAS) will receive a $300 payment, and an additional $200 will be given to those eligible for the Guaranteed Income Supplement (GIS). The one time payment will be made automatically, so no application is required.
The government also announced it will extend the 75% wage subsidy program beyond the initial early-June end date, with specifics to come.
The numbers
Following the massive screening of patients and employees that took place the week of May 4 at the Gatineau Hospital, part of the results indicated 11 people tested positive for COVID-19: 5 patients and 6 employees.
On May 13, CISSSO, the Outaouais’ health authority, announced that the designated COVID-19 unit at the Hull hospital was expanded and a second unit added in order to separate intensive care patients from those requiring less continuous care.
As of press time, there were over 43,000 cases of the virus in Québec (3,562 deaths). The Outaouais now has 395 cases (242 recovered) and 11 deaths. The Municipality of Pontiac has <5 cases while the MRC Pontiac has 0.