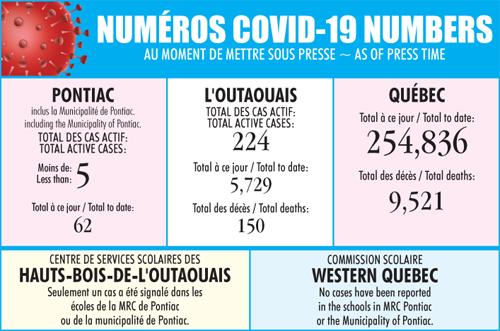 QUÉBEC – Confirmed case counts have reduced slightly, but most of Québec remains in “lock-down,” including a nightly curfew, the banning of all gatherings and the closure of ‘non-essential’ businesses until February 8.
Over 1,500 fines have been issued across the province for curfew breaches, including some in the Pontiac, said Marc Tessier, Sûreté du Quebec spokesperson. However, although statistics are not available by MRC, Tessier said the vast majority of people in the Pontiac are following the rules.
Vaccine rollout
According to CISSSO, the Outaouais’ health authority, 7901 vaccines were administered in the Outaouais as of January 22.
Jane Toller, MRC Pontiac warden, said she was told vaccination of the general population, beginning with those 80 years and older, will begin as early as February 15 and continue until September. COVID vaccination clinics will be
in Shawville and possibly another in Campbell’s Bay, she said. In the MRC Pontiac, there are over 600 people in the 80+ category, about 2,000 in the 70 to 79 years old range, and around 3,000 in the 60 to 69 category.
Marie-Pier Després,
CISSSO communications agent, confirmed that it plans to start vaccinating those 80 years and older in mid-February. “Any decrease in vaccine supply may cause delays in our plan,” she added.
Canada has been told Pfizer will decrease the number of vaccines coming from its Belgium factory, with no doses expected to arrive the week of January 25 and other reductions the following two weeks. As a result, Québec has altered its vaccine schedule target from 250,000 doses by February 8 to 225,000.
Vaccine schedule debate
Québec’s vaccine strategy has been debated over the last couple of weeks,
particularly concerning the delay between administering the first and second doses.
To vaccinate as many people as quickly as possible, the province changed its
vaccination strategy in early January. Previously, since the vaccine requires two doses, half were held in storage, but now all does are used as they are received, meaning the 21 and 28 day spans the vaccine companies recommend between doses will not be respected.
The National Advisory Committee on Immunization and the World Health Organization determined it’s safely possible to space out the doses of both Pfizer and Moderna’s vaccines by up to 42 days (to limit immunity depletion), but Québec has decided to delay the second dose by up to 90 days.
Pontiac MP William Amos publically criticized Québec’s plan. “I hope and trust…that any adjustments to Québec’s vaccine deployment will be based entirely on science. I appreciate Québec’s rhetorical focus on “solidarity,” but it’s fair to question its focus on getting the first dose to a maximum number of people, at the expense of unduly delaying the second … The use of vaccines should be consistent with the conclusions of the trials that led to their approval by agencies like Health Canada or the FDA. Science must predominate,” he wrote on social media.

According to some media reports, Québec may change its vaccination plan based on a study from Israel where data on 200,000 elderly people suggested the first dose only lowered infections by 33 % rather than the approximate 90% experts predicted.
Funding for Pontiac legions
On January 18, Pontiac MP William Amos announced nearly $33,000 in funding to support the local legions: Pontiac ($10,000$), Quyon ($11,432.30), and Wakefield ($11,432.30) to help cover operating costs through the federal government’s Veterans Organizations Emergency Support Fund.
“Organizations receiving these funds will have access to the support they need to replace charitable and other revenue lost because of the pandemic, and will be able to continue their work with veterans and their families during a time when it is needed most,” said a press release from Amos’ office.