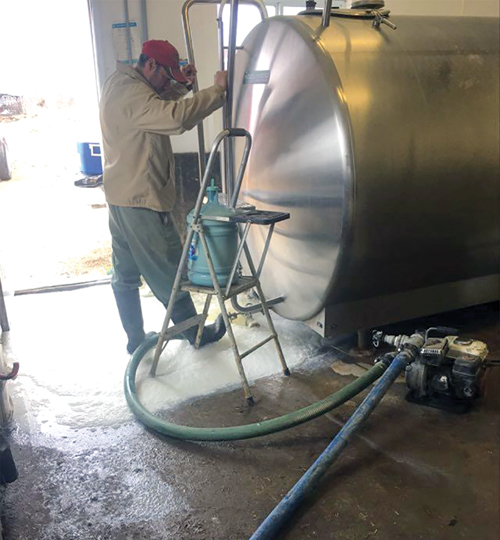 MRC PONTIAC AND PONTIAC – Fluctuations in the demand for Canadian milk has sent thousands of litres literally down the drain across the country as farmers deal with unforeseen highs and lows due to Covid-19.
According to Shawville dairy farmer Robbie Beck, retail demand for milk is up by about 20%, but with grocery stores limiting quantities of some products to prevent panic buying and restaurants and schools closing or reducing operations, the increase in retail isn’t enough to offset the decline in demand from food services, which accounts for a “big chunk” of the market.
“About 60% of cream and cheese goes to restaurants,” said Beck. There have also been logistical problems getting the products to store shelves quickly enough, one of which is fewer delivery trucks because of the crisis.
However, cattle do not have shut-offs and supply continues as usual, resulting in a significant surplus of a perishable product. As a result, dairy farmers have been advised to dump milk on their farms on a rotating basis to rid the system of excess production.
According to Beck, in Québec, 2.25 million litres of milk would have been dumped the week of March 20, but through collaboration with processors,
2 million litres was transformed into cheese and donated to food banks. However, the following week, a 4.8 million litre surplus was dumped and entirely wasted, followed by a predicted 13 million litres the week of April 13.
“Every dairy farmer in Canada is affected, and the burden of the [wasted milk] is split evenly between us. So we’re still paid for every litre of milk we produce, but less, resulting in a substantial loss,” explained Beck, who hadn’t received his latest payment statement to verify how much of a loss.
The Québec milk market board determines which pick-up routes must be dumped every week. The Pontiac has two routes, and so far Beck has had to dump his milk once in sealed manure storage bins on his property while
other local producers have dumped twice. “All of the regular tests and samples are done as if it’s being shipped, but it ends up being dumped,” he said.
Beck said he was surprised by his reaction while watching his 6,200 litres of milk being wasted. “I was overtaken by a sad feeling even though I’m on the dairy board and knew this was coming. It was devastating knowing there’s a use out there for the milk, but no way to get it there fast enough,” he concluded.