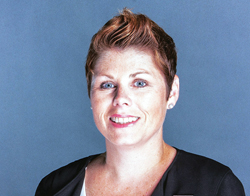 Cyndy Phillips, a resident of L’Isle-aux-Allumettes and the MRC Pontiac’s new Director of Economic Development.

MRC PONTIAC – Cyndy Phillips, former director of Chutes Coulonge, has added a new entry to her list of more than 15 years of experience working in both the public and private sectors in business and tourism development, investment attraction, marketing and strategic planning. She became the MRC Pontiac’s new Director of Economic Development, February 19.
Phillips was an economic development agent at the MRC prior to her promotion. Her professional achievements include developing strategic tourism plans, establishing two hotel chains and creating a major industrial park in Petawawa. Phillips served on the Eastern Ontario Economic Development Commission, as vice-president of the Ottawa Valley Tourist Association and on the Upper Ottawa Valley Chamber of Commerce. She also helped establish The Greater Petawawa Area Trails Association.
Phillips, a long-time Pontiac resident, believes in the area’s unique assets and is passionate about promoting its diverse experiences and opportunities.
“We have tremendous opportunities and benefits to our advantage, such as our cross-border position, our competitive land rates, and our low operating costs,” said Phillips, noting her short-term goal is continuity of the many projects currently underway at the MRC.
“Current priorities include a regional agricultural market, a village centers project (implementing development and revitalization plans for village centers in the MRC with funding from Fonds d’Appui au Rayonnement des Régions) and Vision 2030,” she added.
In the long-term, Phillips hopes for economic prosperity through entrepreneurial growth, youth retention, resident and larger investment attraction and community sustainability. “Advancing technology remains a longer-term goal and we’re already working on improved telecommunications, value-added processes and new environmental initiatives. We have a diverse array of tourism attractions and
natural assets and to capitalize on these and share them with visitors is a
continued priority,” she concluded.