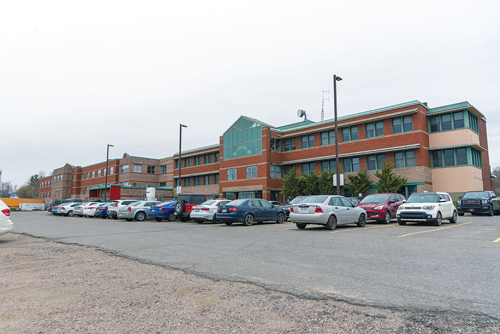 The Pontiac Community Hospital’s obstetrics unit is half way through a six-month shutdown announced in February 2020, and with COVID-19 at the forefront of CISSSO’s concerns, Warden Jane Toller says it’s realistic to expect that the September re-opening date will be postponed.

SHAWVILLE – The Centre intégré de santé et des services sociaux de l’Outaouais
(CISSSO) has hired more than 400 people since the beginning of the COVID crisis to help the region fight the pandemic. But, with a number of employees off sick, in isolation as a precaution or absent for unknown reasons, it’s unclear to what extent these new hires will help address the region’s chronic staff shortages after the pandemic is over.
“The majority of them are temporary hires. A few, depending on their availability, interest and available positions, may be [permanently] hired,” said Marie-Pier Després, CISSSO media relations agent, noting the organization is in the midst of
an “intensive hiring movement.”
According to Després, although CISSSO’s staff are overwhelmed with the COVID crisis, they are still trying to recruit staff for the Pontiac Community Hospital (PCH), whose obstetrics unit (OBS) is currently nearly three months into a six month shutdown due to a lack of nursing staff. The reopening was scheduled for September 2020.
“Since January 2020, we’ve hired 9 nurses for the Pontiac Hospital, but of those, 6 are not really nurses [yet] because they must be supervised while providing care. Following the examination of the Ordre des infirmières du Québec, they will obtain the right to practice as nurses. Not all of them will necessarily work in obstetrics and if they are interested, they will need to be trained,” Després told the Journal.
Després said the status of the PCH’s OBS unit remains the same despite the crisis,
with the reopening still scheduled for September. However, Jane Toller, MRC Pontiac warden, is doubtful it will re-open on schedule, although she said CISSSO is moving along well and has made significant improvements (promoting the organization, hiring nurses, promoting midwifery, training general surgeons to
perform c-sections, etc.).
The frequent meetings of the working committee have been postponed because of the pandemic: “The MRC/CISSSO working group had planned to see the unit reopen by September, but that was prior to COVID-19. With it taking so much time, energy, staff and resources on the part of CISSSO, we understand that working group meetings can’t continue at this time. It’s looking like the September reopening may be delayed, but in no way has this issue become less important,” explained Toller. “CISSSO and the MRC are committed to seeing the unit reopened, are determined to make it happen, and will resume our working group as soon as possible,” she added.
CISSSO was vague when asked about a possible delay: “It will be necessary to
wait for instructions from the aftermath of the pandemic. At the moment, we are
still responding to an important and priority crisis,” said Patricia Rhéaume,
from CISSSO.