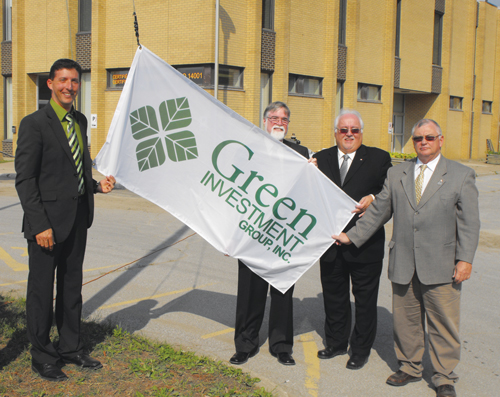 In September 2011, local politicians and the owner of Green Investment Group Inc. (GIGI)  Raymond Stillwell (2nd from left), celebrated the anticipated rejuvenation of the old Smurfit Stone site.  GIGI is currently being investigated by the Quebec Ministry of the Environment.                         File photo

PORTAGE DU FORT – November 27, the CBC national news reported an investigation that may turn out to be a major scandal involving the Pontiac.  The US company which
purchased the defunct Smurfit Stone paper mill (and two other Canadian sites), Green Investment  Group Inc.,  is being
investigated for charges that the company sold all the scrap metal and other items of value without
fulfilling its other promises.  The company had agreed to clean up the site, to attract new “green”
industries, and to create “hundreds of green jobs”. None of these promises were fulfilled, said the CBC, plus the company owes millions in back
taxes to some local
municipalities.
The CBC claims the company dismantled the buildings at the Portage mill site, took out the scrap metal it could sell and left.  Quebec’s Ministry of the Environment is investigating and considering “penal action”.  The company’s lawyer told the CBC he is “unaware of any environmental investigation at the sites in Quebec”.  He hinted that the company has not been successful in raising the capital it needed to attract or start the new green industries promised.
At the Portage du Fort site, the company, says CBC, had promised to
create the 500 jobs lost when the paper mill closed, and bring in 11 new companies. To date, says the CBC, four companies set up there, creating 48 jobs at peak times.  A pellet mill, promised to be the wave of a green future for the site, closed not long after it started operations.
MRC’s flagship
This site was to be MRC Pontiac’s flagship renewal project, and the entire effort was supported by the MRC, working with Pontiac’s MP at the time, Conservative cabinet minister, Lawrence Cannon.
Mr Cannon’s attaché became an officer of one of the companies when Mr Cannon was defeated in the last election.
A site in New Brunswick has suffered a similar fate, said the CBC, with
“millions of dollars” of scrap metal sold off before the operation was closed down.  CBC investigators claim that the company has a similar record in the US – facing environmental fines there, as they are in Canada. This was apparently well known before the Portage deal was announced by the MRC Pontiac and Mr Cannon.
For its part the company claims to be still working to bring in new industry to its sites, including Portage. The Journal has been unable to contact the company or any of the local officials involved to confirm this report. The investigation is on-going, reports the CBC.