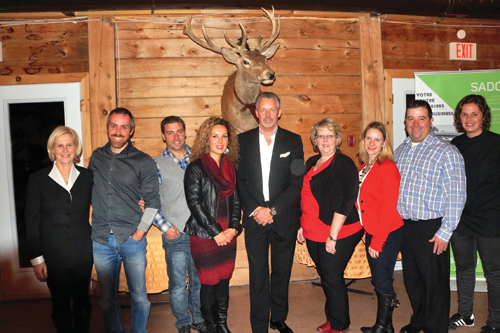 MANSFIELD – On November 12 at Ferme Livamia, François Lambert, an entrepreneur, guest speaker and former celebrity from the television series “Dans l’oeil du dragon” (the French version of Dragon’s Den), spoke about ‘Evolving in a Changing World’.
“He was selected to be a guest speaker at the event due to his skill as a mentor and his knowledge regarding areas like the Pontiac; he is a native of La Petite Nation,” said Amy Taylor from the SADC.
During the afternoon, Lambert
privately mentored members of the Pontiac Chamber of Commerce, SADC clients, and other area entrepreneurs.
Later that evening, about thirty
people attended a networking dinner. During the dinner, when asked about what he thought was lacking in the Pontiac in terms of tourist attractions, Lambert said the agrotourism industry could help attract tourists to the region.
Following dinner, Lambert took the stage and recounted his journey to becoming the entrepreneur he is today. He spoke about jobs he held in the past and opportunities that he seized. “The times change very quickly in business,” he said, indicating that to be successful, entrepreneurs must keep up with
markets and financial aspects and be capable of seizing opportunities when they arise.