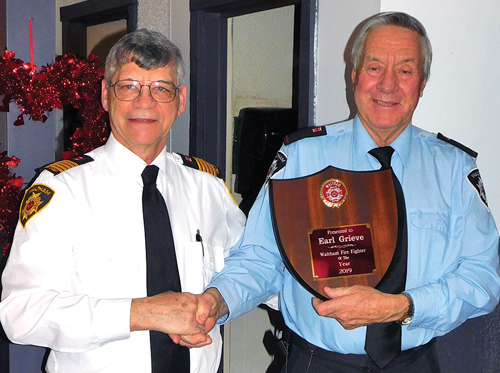 WALTHAM – Attendees at the annual Waltham volunteer fire department’s appreciation event enjoyed a catered roast beef supper at the Waltham Station Restaurant February 15. The evening also recognized the Municipality of Waltham councillors and public works staff.
Fire Chief Larry Perry spoke about Firefighter 1 training, the evolution of fire services with the fire safety cover plan and gave a review of 2019. The department responded to 24 emergency calls last year, not including the numerous requests for assistance due to flooding. Perry also mentioned the department and Ladies Auxiliary’s fundraising efforts toward purchasing a newer rescue van.
Perry presented Earl Grieve with a plaque for Firefighter of the Year, 2019, and highlighted Grieve’s many duties with the department since joining in 1972. Two new recruits were introduced: Jacob Gale and Eric Gaudette. Perry also acknowledged Chris Gardner, a new Waltham firefighter, and promotions to Lieutenant for Michelle Venasse and Jason Pilon. Perry lauded Julien Gagnon, Public Safety Coordinator for the MRC Pontiac, although he was unable to attend.
All firefighters received special license plates depicting their association with the fire department.
Perry has been a firefighter for 49 years; after five years of service he assumed the role of Assistant Chief, advancing to hold the position of Chief three years later, since 1979.