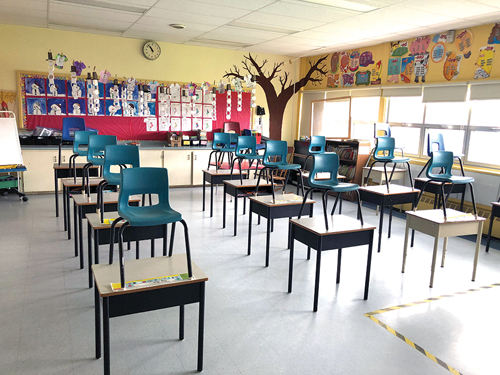 OUTAOUAIS – The working conditions of educational professionals in Outaouais schools are so difficult that one third of them are thinking of leaving their jobs, reported a recent survey conducted by the Fédération des professionnelles et professionnels de l’éducation du Québec (FPPE-CSQ) and the Syndicat du personnel professionnel du milieu scolaire de l’Outaouais (SPPMSO-CSQ) among its members. The survey included over 3,000 respondents.
The FPPE is made up of 19 affiliated unions representing about 10,000 members in the majority (69/72) of Québec school boards.
According to the Outaouais survey, among those who are thinking of leaving their jobs for reasons other than retirement, 39% would like a different job in the public sector, while 49% would prefer a similar job in the private sector where they would benefit from better salaries and working conditions. Jacques Landry, president of the FPPE-CSQ, noted that the same sentiment exists across Québec, as the provincial survey indicates between 23.5% and 51.2% of members from different job categories are considering leaving their jobs.
The Outaouais survey results match provincial results closely, with the top reasons cited for leaving as: heavy workload (Outaouais 68%; Québec 63%), lack of recognition (Outaouais 61%; Québec 49%) and additionally, at the provincial level, 49% indicated salary was the main reason respondents wanted to quit.
Heidi Yetman, president of the Québec Provincial Association of Teachers (QPAT), said it’s currently hard to recruit professionals – speech therapists, psychologists, therapists, consultants, etc. – so more work falls on teachers who already have their hands full. 57% of respondents attributed work overload to the lack of staffing in all job categories.
Annie St-Pierre, president of the SPPMSO-CSQ, said all respondents deplore the fact that they cannot intervene with all students with special needs, or even act in a
preventive context; 79% say only students with the most urgent problems have access to services; 62% say they don’t have the time to carry out preventive interventions; and 74% acknowledge it’s impossible for them to carry out the number of follow-ups they deem necessary.
“The lack of professional resources in our schools has serious consequences. Students with special needs are increasing while the number of professionals is not keeping pace. Often, when we do manage to intervene with a student, it’s already too late. Too often, we put out fires or sprinkle in a few solutions without being able to take the time to better accompany the students,” said St-Pierre.
Strike results in proposal
On April 14, teachers exercised their right to strike from midnight until 9:30 a.m. The Syndicat du personnel de l’enseignement des Hautes-Rivières (SPEHR) reiterated that the goal was to move discussions forward. It called for significant improvements: smaller classes, more services, lighter workloads, better salaries and job security.
The strike affected all schools of the Centre de services scolaires des Hauts-Bois-de-l’Outaouais (CSSHBO) and the Western Quebec School Board (WQSB). Picket lines were held in Shawville, Campbell’s Bay, Mansfield, Fort-Coulonge, and L’Isle-Aux-Allumettes.
As Yetman explained, teachers have been in negotiation with the
government for two years. “Québec teachers are the lowest paid in Canada. E.g. most teachers start with a $50K salary, but in Québec it’s $46K. Salary increases incrementally and it takes Québec teachers longer to get to the maximum salary. E.g. after 10 years, a Québec teacher makes $65K whereas someone in Ontario would make $99K,” she told the Journal.
Yetman said the objective of the strike effort was to spur the government to make better offers, which will both improve the quality of education and services student receive as well as teachers’ wellbeing.
Another strike was planned for April 27, but Yetman announced on April 23 that it would be cancelled due to movement at the negotiating table. QPAT and the Fédération des syndicats de l’enseignement (FSE-CSQ) will present education staff with a sectoral proposal.
“This is not an agreement in principle, it’s a proposal, and therefore in the days ahead, you’ll be invited to review and vote for or against the proposal. You will decide if this is an agreement in principle,” Yetman said in an online video message directed at educational staff.