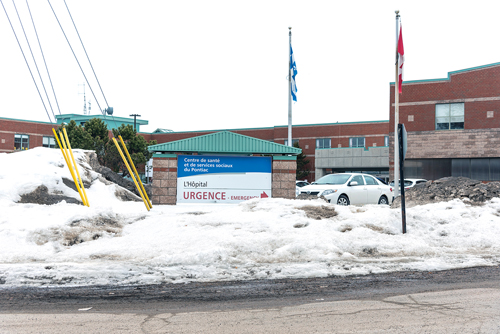 SHAWVILLE – MRC Pontiac Warden Jane Toller says the Pontiac Community Hospital’s (PCH) obstetrics unit is on track to reopen in September after the six-month closure due to lack of nursing staff was announced a month ago.
The Centre intégré de santé et de services sociaux de l’Outaouais (CISSSO) recently hosted open houses at their establishments, including one at the PCH
on March 4, to encourage prospective employees to visit and learn of
employment opportunities. According to Toller, CISSSO received a lot of resumes and hired a new nurse who is training in obstetrics for the PCH.
On February 26, after a meeting with representatives of CISSSO, the MRC Pontiac’s Council of Mayors unanimously passed a resolution asking the province to immediately guarantee funding to equalize nurse salaries in Ontario and Québec; and mandated Toller and mayors Gilles Dionne (Mansfield),
Sandra Murray (Shawville), and Maurice Beauregard (Campbell’s Bay) to form a committee with CISSSO to create an action plan with realistic objectives, both short-term and long-term.
Toller hoped passing the resolution before the provincial government’s budget vote on March 11 would encourage them to address the wage gap problem promptly, but nothing was announced. Nurses in Ontario earn about $20,000 more annually than those in Québec.
The committee has only met once. A meeting planned on March 12 was postponed due to the Coronavirus pandemic. However, Toller said the group will continue to work diligently and participate in bi-weekly teleconferences until they can resume
face-to-face meetings at the MRC headquarters.
Toller spoke to CISSSO representatives on March 16 via teleconference. “CISSSO has accomplished a lot in a short time. Now it’s up to the MRC to assist with attraction to the Pontiac and incentives for medical personnel to come here,” she told the Journal.
The MRC is exploring strategies like increasing marketing of the region,
hiring a “welcoming ambassador” to attract hospital staff and new residents in general, and offering incentives like property tax breaks and discounts on rent for new hospital workers. The MRC is also working with CISSSO to develop compensation packages to narrow the Ontario-Québec wage gap for nurses and CISSSO is promoting midwifery.
Earlier this year, the MRC asked the Minister of Health to award the Pontiac special status as a border region.