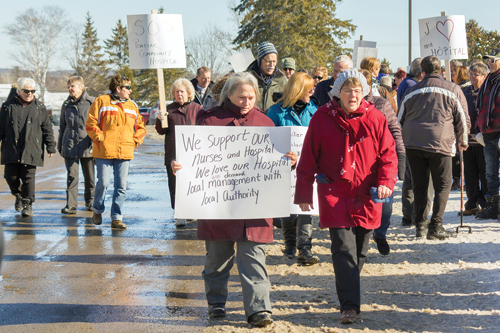 Over 250 people protested the six-month closure of the Pontiac Community Hospital’s obstetrics unit and the need to equalize nurses’ wages to those of Ontario, March 1 in Shawville.

SHAWVILLE – Over 250 people gathered at the main entrance to the Pontiac Community Hospital, March 1, to protest the six-month closure of the hospital’s obstetrics (OBS) unit and the need to equalize nurses’ wages with Ontario to address chronic staff shortages. A week earlier, about twenty people protested the same issue in front of the Hull hospital.
“We’re here to show the Québec government that we will not be silenced and to ensure all of our health services will continue to be provided locally. Pontiac mothers should be able to give birth in the Pontiac,” said Josey Bouchard, spokesperson for Pontiac Voice, a citizens’ group that organized the rally.
Josée Filion, director general of the Centre intégré de santé et de services sociaux de l’Outaouais (CISSSO), announced the temporary closure on February 21 in Shawville, citing the 14 OBS interruptions the hospital experienced since March 2019 and the need to take the time to rebuild the department, which is now down to 3 nurses and 3 doctors. A minimum of 8 nurses and 4 doctors is required to re-open the unit.
Pontiac MNA André Fortin said he is furious the problem was allowed to get this bad when a solution is available, one that was promised during the CAQ government’s election campaign: raising the salaries of nurses to match those of Ontario, who earn about $20,000 more annually.
However, according to Fortin, the CAQ doesn’t seem willing to act quickly. “The regional minister’s (Mathieu Lacombe) answer to my suggestion that they increase nurses’ salaries in the short term was ‘We have four years to fulfil our
promises’.
“That may be so, but when you have a crisis situation like this, you don’t wait to implement a solution everybody agrees with,” he told the Journal.
On February 26, the MRC Pontiac’s Council of Mayors held a special
meeting with seven CISSSO representatives to discuss the situation.
After the hour-long meeting, the mayors unanimously passed a resolution asking the province to immediately guarantee funding to equalize nurse salaries in Ontario and Québec; to work with CISSSO to create an action plan with realistic objectives, both short-term and long-term, one that address the working environment and morale to increase the return of nurses on sick leave; and that Warden Jane Toller and mayors Gilles Dionne (Mansfield), Sandra Murray (Shawville), and Maurice Beauregard (Campbell’s Bay) sit on this action plan committee.
“It was important to pass the resolution before the vote on the provincial budget on March 11,” said Toller. Earlier this year, the MRC passed a resolution asking the Minister of Health to award the Pontiac special status as a border region.
“CISSSO is not a political entity, and when the closure was announced, the first thing Josée Filion said when I spoke to her was that they need our help,” said Toller.
“It’s going to be a never-ending problem unless something is done … Sometimes it takes a crisis to improve things. Right now, the big issue is obstetrics, but overall [we’re working on] a much bigger picture. We want to bring the PCH back to where it was: a place where staff know they are appreciated and people want to work,” added Toller. Other solutions include offering incentive packages to new nurses, more local training, and encouraging the profession in local schools.
On February 24, the Conférence des préfets de l’Outaouais, a regional
warden’s table, passed a resolution supporting the MRC Pontiac’s plight
regarding the health file.