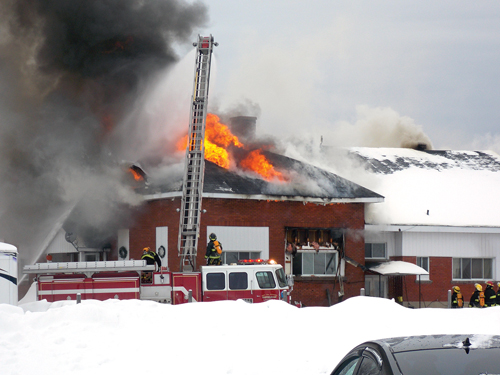 LITCHFIELD – A severe house fire has left a Litchfield family of seven without a home.

LITCHFIELD – A severe house fire has left a Litchfield family of seven without a home.
The Campbell’s Bay/ Litchfield and Mansfield fire departments responded to the call for help around 1 pm on February 7, but were unable to save the century-old home, which used to be a school.
Luckily, homeowner Richard Lepack and one of his business’ employees were the only ones home when the fire began; his wife Marthe was attending an appointment at CHEO with their youngest daughter, and their other children were in school. After working outside for some time, Richard entered the home to find it filled with smoke and immediately called 911.
After news of the fire spread, many community members donated food, clothing, and cash to the family. “My heart is a little overwhelmed at the moment. We are so blessed to have an amazing community that did not hesitate to come and offer their support. This week has been one of the hardest we have had to face, but we will take it one day at a time,” said Marthe. The couple’s two nephews were also
residing in the home.
With two special needs daughters, the couple experienced the added stress of promptly gathering their daughters’ numerous medications, supplies, and health equipment.
“The Lepacks would be the first people to help someone else in need. They would do anything for anyone in a heartbeat,” said Richard’s
sister Margaret, who is organizing a benefit party for the family on March
4 at the Pontiac Conference Centre in Fort-Coulonge. Tickets are available for $10 each from Margaret and other community members; call (613)-432-0095 for more information. The event will include entertainment by Phil Denault, a silent auction, numerous door prizes, a 50/50 draw, etc. Doors will open at 6:30 pm and entertainment will begin around 8 pm. A Gofundme account has also been created to collect donations.
The home of Richard and Marthe Lepack and their five children was
completely destroyed by fire, February 7.