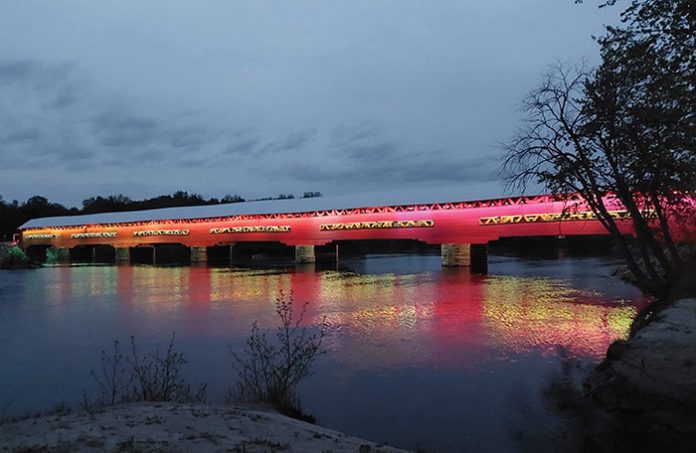 MANSFIELD-ET-PONTEFRACT – Friday, May 20, Phare Ouest in collaboration with the municipality of Mansfield-et-Pontefract organized a press conference to announce the inauguration of the Félix-Gabriel-Marchand bridge following restoration work that lasted over four years. Just after 9 pm, over a hundred people were present to experience the new lighting system on the bridge.

According to Tourisme Outaouais, the Marchand covered bridge is the longest covered bridge in Quebec. It was built in 1898 by Augustus Brown of Beachburg. The 153-metre structure replaced two older bridges spanning the Coulonge River, linking the lumber camp on one shore to the village of Fort-Coulonge on the other. Built entirely of pine and held up by six wooden pillars, the one-way bridge was covered, so it wouldn’t rot. This bridge is registered as a historic building by the Quebec government and is named after a former politician and premier of Quebec, Félix Gabriel Marchand (1897–1900).

Louis Harvey, Vice President of Phare Ouest, was accompanied by local politicians at this unique inauguration. “Thank you to all those who believed in this project, which showcases Quebec’s historic heritage with the restoration of one of the last remaining covered bridges in Quebec. Thank you to the Minister of Transport of Quebec in the Outaouais region for the service and assistance provided in the realization of the project. Let’s also highlight the opening of the permanent exhibition at the George Bryson Cultural Centre,” said Mr. Harvey.

Sandra Armstrong, Mayor of Mansfield and Pontefract stated: “This is a very special moment that the bridge is reopening to the public; it’s a mixture of history dating back to 1898, supported by permanent lighting.”

Christine Francoeur, Mayor of Fort-Coulonge called the project an achievement and commented: “I enthusiastically supported this project led by Phare Ouest and I wish them success in this endeavour, which will raise the profile of our municipality and the Pontiac region.”

Jane Toller, the warden of the Pontiac MRC congratulated Louis Harvey and added: “I am very proud that our restored Félix-Gabriel-Marchand Bridge will become a unique light show that will attract many visitors to our magnificent region.”

According to Julie Kinnear, President and CEO of Tourisme Outaouais, this organization is proud to contribute to the illumination of the Félix-Gabriel-Marchand Bridge. “An original and unifying project that enhances and contributes to the promotion of the cultural heritage.”

MNA André Fortin mentioned the benefits of this revitalized infrastructure for citizens. “The permanent lighting project, which combines heritage with innovation, as well as local pride with tourism development, will transform our bridge and thus the face of our region.”

“I am convinced that your project will make it a key driver of economic, cultural and tourism development,” said Fortin.

Sophie Chatel, Member of Parliament for Pontiac highlighted the hard work of the community to save the iconic symbol of the region. “This red arch not only spans the Coulonge River, but it is the bridge between our glorious past and our path to a more prosperous future.”