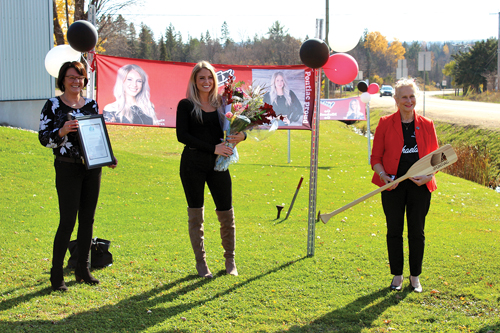 LITCHFIELD – A small gathering organized outside the MRC headquarters, October 23, presented Michaela Cahill with an award recently created to
recognize outstanding achievements of the region’s residents: the MRC Paddle of Achievement Award. Several mayors and elected officials as well as members of Cahill’s family attended.
“If you had asked me seven years ago if I’d be here today, [I never would have believed it],” said Cahill, who has on numerous occasions said she joined the competition in order to show her two daughters that it’s never too late to follow your dreams, even for young mothers.
Cahill competed in the finale of Season eight of La Voix where she finished in third place. The entire Pontiac region rallied together to show their support by displaying banners saying “Go Michaela Go” on lawns and businesses and by sporting Team Michaela shirts.
“She brought the whole region together in a time when everyone is more
separated, and put the Pontiac on the map,” said MRC Pontiac Warden Jane Toller. “Her journey really brought the Pontiac together as we joined in our
support for her, creating such pride and joy in all of our hearts,” she added.
Toller noted the award will not be handed out annually, but can be awarded to recognize outstanding achievements in the future.