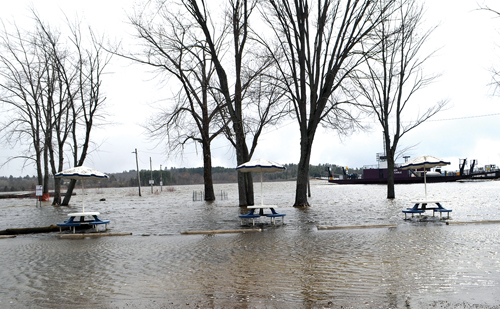 MRC PONTIAC AND PONTIAC – With the annual flood season started as the Covid-19 pandemic continues, the Ottawa River Regulation Planning Board (ORRPB) reassured the population that the situation isn’t as worrisome as in past years, but cautioned owners to be ready. Flooding could be challenging this year given restrictions on social distancing.
Flooding has remained minor so far, but according to Michael Sarich, ORRPB Senior Water Resources Engineer, future precipitation and temperatures hold all the cards and can’t be predicted very far in advance. These conditions determine the amount of runoff into the river and its tributaries, but also the timing of when northern reservoirs, which hold back northern runoff as long as possible, must begin releasing water.
“Currently, the cool temperatures help the snowmelt occur at a moderate rate,
but unforeseen precipitation and warming can change the outlook fairly quickly. There’s still a large northern snowpack, but conditions have been advantageous
so far; spring started earlier than in the last three years, increasing the length of time over which the melt occurs. With cooler temperatures and little forecasted rainfall, the near term forecast is positive. Time will tell…” explained Sarich, noting snowpack in the mid and northern part of the basin remains above normal with upper regions still accumulating snow as depths exceed 2 meters. There is no remaining snow in most southerly portions.
The ORRPB had issued an advisory that minor flood levels might be exceeded in flood-prone areas between the Fort-Coulonge and Montréal regions on Easter Monday due to rainfall however, according to Sarich, rain concentrated in the south-eastern portion of the watershed and the Pontiac received only 10-15 mm;
the result was not a cause for concern.
“There was a moderate response in local tributaries which caused water levels that had been slowly decreasing to rise slightly,” he explained.
On April 14, water levels in Fort-Coulonge were at 107.24m above sea level, compared to the historical high on the same day of 107.81m. Water levels rose at the end of March, but then decreased in early April, a phenomenon Sarich explained: “Levels rose due to the increased snowmelt in tributaries above the Pontiac caused by warm weather the last weekend in March. Levels then continued increasing through the first week in April, but then decreased due to cooler temperatures slowing the flow from these tributaries,” he told the Journal, noting reservoir discharges have been minimal.
Typically the Ottawa River reaches two peaks: one associated with more localized inflows and the other with snowmelt runoff from the north. There can be a combining of these if warming or significant precipitation occurs all at once over a large portion of the basin.
The ORRPB will issue public advisories if water levels are expected to become problematic.