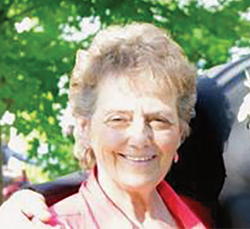 MUNICIPALITY OF PONTIAC – The death of 72-year-old Louise Lortie Séguin, who drowned after driving into a major washout—21 metres wide and 7 metres deep—on Bronson-Bryant Road during the 2019 flooding was preventable, says the coroner’s report completed on May 12.
Coroner Marie Pinault described the circumstances of the accident. On April 20 at 2:32 a.m., a couple called 911 to report the washout and parked with their lights shining toward it with their caution lights blinking to alert other motorists.
However, due to a misunderstanding regarding the seriousness of the washout, no police officers or firefighters were dispatched to the scene. “The operator seemed to have trouble understanding the gravity of the problem. She transferred the call to her supervisor who contacted the director of the Municipality of Pontiac’s public works division at 2:36 a.m. This person said the culvert was inspected the day before and there were no problems. He said he would advise workers to secure
the site. No police were dispatched,” says the report (translation).
At 3:05, a woman from a towing company called the non-urgent public works line of the MRC-des-Collines to report the problem after the couple had contacted
her, knowing she was a volunteer firefighter, and concerned that no help had arrived 30 minutes after their call. The operator said public works were aware
and would arrive soon.
The couple called 911 again at 3:24 a.m. after they tried to alert and stop Lortie Séguin, who was on her way home from a friend’s house, by waving and blowing their horn; they were unsuccessful and she drove into the hole. Paramedics were immediately dispatched and police arrived at the scene as well as the local fire department. She was taken to the Pontiac Hospital where she was pronounced dead at 4:48 a.m.
The head of public works and another employee arrived at the scene at 4:42 a.m., about an hour after the 911 dispatcher had re-contacted the director to inform him of the accident. “It’s clear that a faster response from public works could probably have prevented this unfortunate accident,” says the report.
“One could believe that a police vehicle would have further dissuaded Ms. Lortie Séguin from continuing her journey. Relatives said she would not have stopped in the middle of the night at the request of a stranger in an isolated place,” Pinault wrote.
Procedure modified
In the fall of 2019, the MRC-des-Collines police modified procedures for calls relating to public works issues. Dispatchers now must contact the municipality quickly to assess the emergency and, if there is a fear for public safety, dispatch police or firefighters until public works employees arrive. If no one from public works responds and they do not hear from them within 15 minutes, dispatchers will send a patrol vehicle to the scene. Pinault noted she is satisfied with these changes.
The report concluded by recommending the municipality’s civil security division “ensure its personnel are reminded of the importance of following established procedures during emergency calls involving road infrastructure to protect human life.”
Joanne Labadie, mayor of the Municipality of Pontiac, said the municipality is in discussion with the coroner to better understand the recommendation. “We will be meeting again in the coming weeks to review and share more documents. I have nothing further to add until this exercise is completed,” she told the Journal.