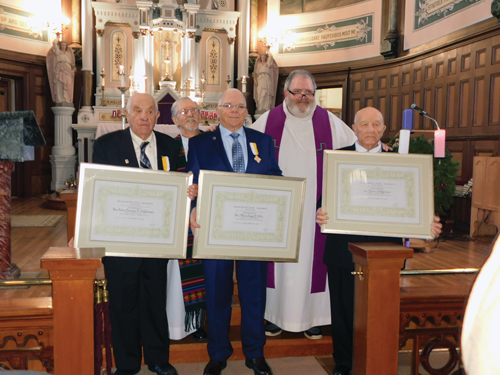 L’ISLE-AUX-ALLUMETTES – Jerome Arthur Sallafranque passed away February 7, 2021 in his 87th year and will long be remembered for his many contributions as
a community volunteer, his political achievements, and his love of the land as a farmer.
Born April 20, 1934, Sallafranque was the ninth child in a family of 16 (eight boys and eight girls), all raised on a farm in L’Isle-aux-Allumettes; the family’s name dates back to 1907 when his grandfather Clement purchased land in the area. Sallafranque and his wife continued the family tradition when they purchased 170 acres of land and began farming in April 1964.
Over the years, Sallafranque was involved in many causes and served many organizations on top of working in the construction industry from 1965
to 1992: as chairperson for the MRC Pontiac Ottawa River Waterways board
from 1996-2002; director of Caisse Populaire Desjardins Chapeau from 1987-2016 and chair of the board from 1999-2012; a member of the Chapeau Agricultural Society from 1964-1990 including the role of president; president of the Citizens Committee of Chapeau from 1975-1990 and the Young at Heart from 2001-2004; and he was involved in the construction of Harrington Community Center.
Sallafranque served with distinction as mayor of L’Isle-aux-Allumettes from 1985-1999 and as a councillor from 1999-2005. During his political tenure, he was instrumental in expanding the the one-lane bridge connecting Chichester to Chapeau to two lanes. He also worked on files like the Upper Pontiac Sports Complex, the former fire hall in Demers Centre and the purchase of the municipality’s present office from the CLSC Pontiac.
“You could say he was a consummate community person, always willing and always looking for ways to improve his community,” said current mayor Winston Sunstrum.
The local church community benefitted from his philanthropy, particularly St. Alphonsus parish where Sallafranque worked closely with parish priest Father Tim Moyle on repair projects, as a member of the St. Alphonsus Parish Council and president of the Property and Building Committee for the Diocese of Pembroke.
To recognize his involvement in his parish and service to the Catholic Church, Sallafranque and two other active St. Alphonsus volunteers were awarded the Benemerenti Medal from the Pope by Reverend Moyle and Monsignor Douglas Bridge at a special ceremony in St. Alphonsus Church, December 2018.
“He was a great role model. We always did things as a family and through our dad we learned early the value of volunteering in our community. He managed to balance work, family and community. His memory was better than a computer
and it never crashed. Dad was always available to help mom with projects around the house, even making quilts and baking. He was a serious opponent when it came to playing cards,” said his children.
Sallafranque is survived by his wife Françoise Lair as well as their four
children, 10 grandchildren (predeceased by one grandson) and four great-grandchildren. In his honour, the Caisse Desjardins des Riviéres de Pontiac donated $1,000 to the Young at Heart Club.