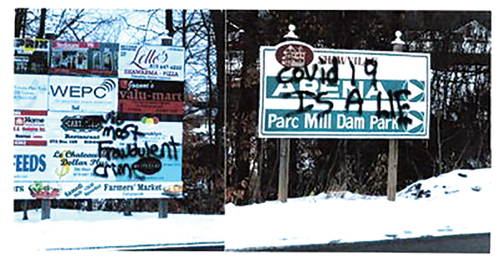 Several signs were spray-painted in a recent act of vandalism.

SHAWVILLE – Shawville was stricken with another bout of vandalism during
the early hours of January 12 around 1 am. COVID-related messages describing the pandemic as “a lie” and the “most fraudulent crime” were painted in several
different locations, including on the town’s business directory sign and a sign at Mill Dam Park.
In response, the municipality is offering a $100 reward to anyone with
information that will lead to the arrest of the person responsible. The matter is
in the hands of the Sûreté du Québec, and as of press time, there were no leads on the case.
After the reward and information about what happened was posted on social media, several people said they would match the municipality’s reward, although Mayor Sandra Murray said it has not officially been increased. The damaged signs have been removed and the municipality is in the process of repairing and restoring them.
Back in July, similar messages were spray-painted on the PPJ trail running through town as well as an adjacent sign and picnic table. It’s unclear if the same person is responsible this time around although the paint and messages are very similar.
Anyone with information is asked to call the police at 819-648-2141.