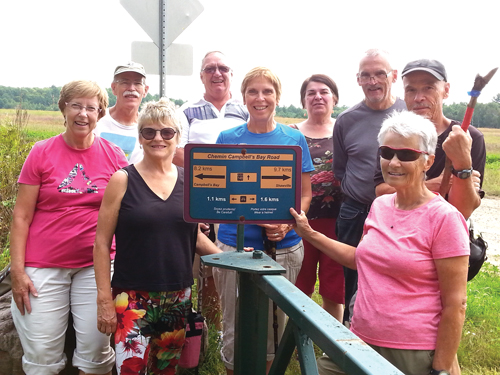 This group of hikers walked 18 km of the PPJ trail, between Campbell’s Bay and Shawville, last September.  As members and supporters of Pontiac’s Feel Fit group, they, and others, are concerned that if ATVs are allowed use of the trail it would become unsafe for hiking and biking.

This group of hikers walked 18 km of the PPJ trail, between Campbell’s Bay and Shawville, last September.  As members and supporters of Pontiac’s Feel Fit group, they, and others, are concerned that if ATVs are allowed use of the trail it would become unsafe for hiking and biking.

FORT-COULONGE – The committee studying “Linking Municipalities
to Give Access to 4 Wheelers” met June 28 at Spruceholme Inn; for the first time it included for the first time members of the newly-formed Green PPJ Verte (GPV), created to promote and protect the traditional PPJ. The group had lobbied for a seat on the committee during June’s Council of Mayors (MRC) meeting.
The committee’s original mandate by the MRC was to “open up roads and link the communities within the MRC Pontiac.” Using the PPJ for ATV use quickly became a main focus of the committee, with no representation from current users. GPV members, Remo Pasteris, from Bristol, and Suzanne Vallières-Nollet from Fort-Coulonge now fill this gap.
Committee Chair Terry Murdock, Mayor of Thorne, told the Journal no decisions have been made and the committee is still collecting feedback from user groups. The committee also reviewed its survey results, collected across the MRC Pontiac: of  1,604 signatures, only 37 opposed allowing ATVs on the PPJ.
Murdock is hoping the PPJ will become a “multi-use” trail that all parties – pedestrians, bicyclers, and ATVs – can use. “A 16 foot multi-use trail will be
created, which can accommodate everyone,” he said, noting the condition of the trail would be improved by having additional manpower to maintain it.
Two sides to every story The two Green PPJ Verte members at the
meeting see it differently. First, they state that the ATV committee was mandated to study the use of back roads, working with the Ministry of Transportation to get
permission for ATV use. (See Open Letter to the MRC page 5). “Why have they changed their study to focus on the PPJ?” asked Vallières-Nollet. “They
are not respecting theiroriginal mandate.”
Next, they say the survey results were skewed because it was placed strategically, where ATV-users would see it (hotels, depanneurs and ATV
dealerships), resulting in biased results. The GPV group has created paper
and on-line petitions to collect signatures of those who are not in favour of ATVs on the trail.
The pair acknowledged that the PPJ is under-used, and in some places in poor condition, but declared, “There are solutions to that situation. Taking it away from current users is not the solution—it needs to be maintained better and promoted more, here, in the Pontiac, and to outside users.
The MRC has been given government funding for maintenance; we need to make better use of those funds and other resources.”
They also argue that safety and logistics are two key issues that the ATV committee is refusing to consider as part of a ‘multi-use trail’. “The trail cannot be widened to 16’ wide; there are wet lands and cliffs on either side, between Shawville and Campbell’s Bay, which make widening impossible,” said one member, after the meeting.  “The expense alone to widen the trail would be astronomical. And, then there’s the idea of sharing the trail. Imagine, going for a family bike ride and having ATVs roar by….your children would be in danger.”
What about increased back road use?
Murdock said opening more back roads to ATV use is also essential. “We opened up municipal roads in Thorne over a year ago and it brought in more
people,” he said, adding that approval must be obtained from the Ministry of Transport for each road used by ATVs.
According to Pasteris and Vallières-Nollet, Green PPJ Verte supports the
ATV committee’s original mandate — to develop more back roads linking MRC Pontiac communities. They urge the committee to focus there, which does not seem to have been explored as much as taking over
the PPJ.
The GPV members still hope their concerns will be heard by the ATV committee; given the reception they received at the June 29th meeting they realize their work is cut out for them. “All people need to speak up. The members of the committee studying this, aside from us, seem to be very single minded: ‘the PPJ is underused, so we want it’. This isn’t democratic and doesn’t fulfill the original intention when the trail was created. It would be a real shame if the trail
is lost for cyclists, hikers and the general public because there will never be anything else to replace it,” concluded Pasteris.
The committee meets once more, August 4, before presenting a report and
recommendation to the MRC’s mayors, which Murdock hopes will be in August or September. Both sides invite public comment.